At least he's good for a laugh once in a while...

In a dim, dirty hostess bar on a sultry backstreet in the Pham Ngu Lao district of Valhalla, a bunch of the tattered shades of the boys from the 66th NVA Regiment and the 1/7th Cav take a break from pounding warm "33" beer and talking shit about the ARVN to stand up, drop their khaki and OD trousers, and hang a collective moon on the guy who couldn't run from their war fast enough but now claims that he would rush a mad gunman barehanded. 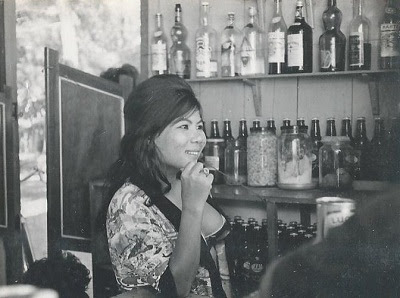 Over at the corner table Trung sĩ Vo and Staff Sergeant Baker spit sourly on the filthy floor and yell at the hostess for another round, cold this time, goddammit, but Hạ sĩ Nguyen thinks that the idea of Five-Deferment Donnie as a rootin' tootin' heeeero is so fucking funny he spits beer out his nose and Private Bookwalter has to pound him on the back so hard that he hits his face on the table and the whole squad, including Loi the B-girl, breaks up laughing.