The uniquely appalling vision of a "low information" President installed in the highest Executive office in the United States, lying and raging on his cellphone whilst sitting on the toilet in the early hours of the morning is difficult to ignore. But it's worthwhile to recall that, at least in the political sense, the damage that the administration of His Fraudulency is doing has little or nothing to do with Trump himself.

As previously noted on this site, the GOP of 2018 exists to pimp for plutocracy, construct a new Gilded Age where their domestic oligarchs can imitate the sort of open Putinesque kleptocracy so admired amongst the Federalist set, and punch down at the lib'ruls, hippies, poors, and dusky Others.

One aspect of the Fraudulency Administration that is not often dissected, however, is the Return of the Harding Ethos of "public service"; the brutally open graft and hoovering-up of public largesse not seen since the Roaring Twenties. From the simple and crude quid-pro-quo of holding government functions at Trump's properties to the sort of brutal griftopia of the Whitefish Energy and Tribune Contracting scams run through as Puerto Rican "disaster assistance" and the multiple Trump appointees mulcting the public trough in ways ranging from upgraded commercial flights to ridiculous "security" expenses, the current administration is marching boldly back to the future of "honest graft". 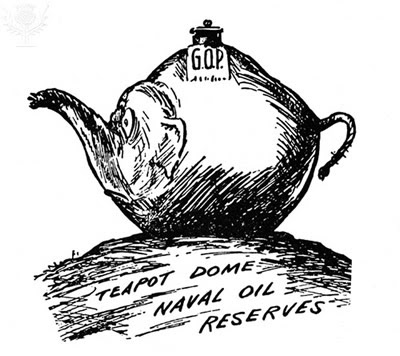 And why is this a subject for a military-geopolitical blog?

Because the Department of Defense is, as Willie Sutton said, "where the money is".

I don't think that anyone here will question the bald statement that there is corruption in the U.S. military procurement process.

Perhaps not the sort of open, hand-out-palm-up sort of corruption on display at Mar-a-lago. But the "military-industrial-congressional-complex" has been a one-hand-washes-the-other since "defense" became big business back in the 1940s. Defense contractors schmooze legislators and Pentagon program managers. Ex-officers and ex-congresspeople slide effortlessly into corporate offices at Boeing, Raytheon, FLIR Systems, Lockheed-Martin, and so on.

Nobody has to do anything so crude as slip a Franklin into some Congressman's pocket. Ensuring that some F-35 sub-sub-contractor is located in his district, cranking out jobs and tax revenue, is often more than enough.

That's...well, let's call it the "usual corruption", red-white-and-blue corruption, the sort of thing that a big, rich, imperial power can tolerate and still survive, and even prosper.

My concern is, rather, that the incredible degree to which Trump, the Trumpenspawn, and his Trumpenproletariat have normalized open, hand-out-palm-up corruption will cause it to slowly, but inevitably, begin to seep into the U.S. military bureaucracy.

Seven years ago, when the arc of the GOP's New Gilded Age Project had become apparent, I wrote a piece over at my personal blog about the blatant corruption I saw in Panama. One of the most visible problems in the armed forces of the various parts of the Third World I saw when I was on active duty was this issue of vicious, endemic corruption that ran from the lowest private up to the big building in the capital that housed the Ministry of Defense or whatever it was called.

Aside from the innate foolishness of trying to Hustle the East, one of the biggest problems with the endless Wars on The Middle East we've fussed with since 2001 has been the ridiculously corrupt armies of our supposed "allies" in Afghanistan and Iraq. Everything from military funding that simply disappears to company officers padding their alpha roster with "ghost soldiers", imaginary people whose paychecks go into the commanders' pockets.

We've never seen that sort of thing. Not in my army.

We haven't swum in the sort of sea of corruption that the Trumpkins swim in, not since my grandmother was a young woman, which is to say that none of us have the slightest experience with how to deal with this kind of venality, or know what will happen if the U.S. government and armed forces are allowed to steep in it for another three to seven years.

I'd like to think that my Army is too honest to become the Panama Defense Force.

But I thought my Army wouldn't torture helpless prisoners, or lie about checkpoint shootings, either. I never thought I'd see my Army march witlessly off into a wilderness of mirrors, wasting blood and treasure in pointless cabinet wars without so much as a whisper of protest. It's like we learned nothing from the wasted years and wasted lives of Vietnam.

What I fear is that the corruption and delusion at the heart of the "wars on terror" have set up the U.S. military to become as physically corrupt as they have made us geopolitically and strategically corrupt.

And what I dread is what I've said before about the rest of the prospect awaiting those of us not in the New Gilded Age; we're going to places that none of us understand, that no American has seen for almost a century. And that what we know of those places is that, well, for most of us, they weren't much fun at all.
Posted by FDChief at 4:42 PM