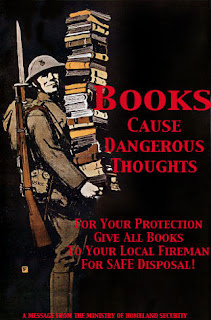 Am rereading ’Fahrenheit 451’  -  Ray Bradbury’s classic novel about a society that burns books.  It was titled for the temperature at which paper burns.  I had originally read it 50-plus years ago, but was too green to give it any deep understanding.  HBO is reportedly releasing a movie about it this May.  But I bet Ray B is spinning in his grave that it will be aired on the TV boob tube.  One of his major points in the novel was that society spent much too much time watching television, and much of what they watch was manipulated i.e. fake news, or fictionalized history.  The man was a prophet.

Can’t happen here you say?   Bradbury claimed he was inspired to write the story by seeing film footage of the brown shirts and the Deutsche Studentenschaft burning books in 1933.  But there were many other tomecides in history prior to that by kings, emperors, conquistadors, a Saint, and Major General Robert Ross of the British Army.

And it is disheartening to see the many dark areas in the ’World Press Freedom Index Map’ published by Reporters-Without-Borders, the NGO that champions freedom of the press and freedom of information.  I would have thought the US would be in the top ten percent.  But no, they are number 43 out of 180 countries so not even in the top 20 percent.