Another Anniversary - Stars and Stripes

Stars and Stripes newspaper was one hundred years old on the 8th of February.  Starting out in France as the voice of the American Expeditionary Force.  A hybrid or perhaps a mongrel, it now operates within the Department of Defense but DOD has no editorial control.  Congress has guaranteed its freedom of speech.  Its first editor Harold Ross later founded and published the New Yorker magazine. 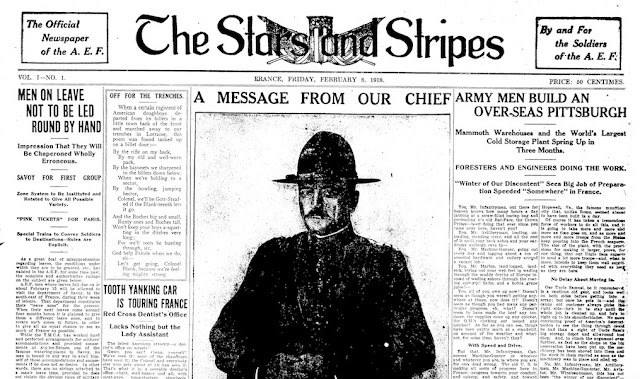 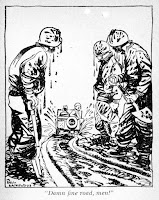 Its most famous contributor was of course Bill Mauldin during WW2 with his Willie and Joe cartoons and his lampooning of the upper brass.  General Patton accused him of being an anarchist and wanted to lock him up in the monkey house.  He was saved by Ike who told Patton that Stars and Stripes is the soldiers’ newspaper and we generals will not interfere.  My father, who fought in Italy, swore on a bible that he personally knew the GI upon who Willie was based.  His favorite Mauldin cartoon was the mud-slinging staff officer's jeep shown here on the right.

Back in 1918, another famous illustrator Cyrus Baldridge, was with Stars and Stripes.  His most famous illustration in the paper is titled ‘The Noncombatant’.  The paper is still going strong in the digital age:  four daily print editions, one each for Europe, the Middle East, Japan and South Korea; a weekly in the US; seven digital editions; and seven blogs.  They still publish Doonesbury despite the push to get rid of it by the right wing, but I think it is only re-run mode.  Plus I have not seen anything recent or Trump in the Stripes, so maybe the first Amendment rights safeguarded by Congress have been put on the back shelf.  Sad as someone in the WH might say.

https://www.google.com/search?q=doonesbury+trump&client=firefox-b-1&tbm=isch&tbo=u&source=univ&sa=X&ved=0ahUKEwiQ-uqFvJrZAhUQWK0KHXhGCqUQsAQIKA&biw=1455&bih=718
Posted by mike at 8:30 PM