Oh, just go ahead and rename the goddamn thing "The Trumpian Republic of Reaganstan" and get it over with.

"President Trump’s vision of soldiers marching and tanks rolling down the boulevards of Washington is moving closer to reality in the Pentagon and White House, where officials say they have begun to plan a grand military parade later this year showcasing the might of America’s armed forces.

Trump has long mused publicly and privately about wanting such a parade, but a Jan. 18 meeting between Trump and top generals in the Pentagon’s tank — a room reserved for top secret discussions — marked a tipping point, according to two officials briefed on the planning."

Let's exhume Ronnie's dead ass and build a honkin' big mausoleum for him on the White House lawn, overlooking Pennsylvania Avenue. We can prop up his embalmed corpse in there as a reminder of how we started down this idiot path.

We can make it Republican red, too.

And then on Lincoln's Birthday or John Birch Day or something, some sort of GOParteitag, anyway, all the bigwigs - the Ryans and McConnells and the Sean Hannitys and Rush Limbaughs and Joni Ernsts, forchrissakes, can join Trump on the reviewing stand on top and salute the forces as they goosestep past. And Napoleorange can salute, too, just like he learned in the little military school where he got the bone spurs that kept him out of Vietnam and safe and rich until he could get elected to play "Commander-in-Chief" and send other poor, dumb bastards out to kill and die for him.

This is what you want, America?

Update 2/8: Jim Wright lays some wood on a GOPandering twit: 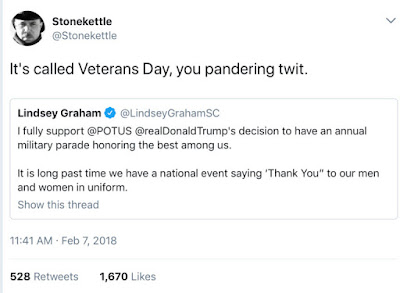