The Six Battles of Karbala 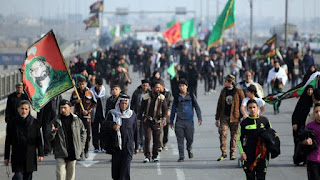 The Arba'een pilgrimage to Karbala has  been underway since 10 October.  It will grow in number rising to perhaps more than 25 million people a few days before America’s Thanksgiving.   It is the largest annual religious pilgrimage in the world, bigger than the Haaj to Mecca, and, dwarfing the ‘Way-of-Saint-James’ pilgrimage to Santiago de Compostela.  The pilgrimage is in mourning of Husayn ibn Ali (sometimes called Hussein), the grandson of the prophet Mohammed.  The vast majority of the pilgrims will be Shia, but a small percentage will include Sunni, Christian, Yazidi, Sabaean and others.  The Vatican has sent delegations in the past, and perhaps Patriarch Kirill of Moscow will send a delegation also.  Most pilgrims walk 85 kilometers (~52 miles) over several days from Najaf.  Some walk in crutches.  Some will walk all the way from Basra.  Many will come from India, Africa, Europe, southern Russia, Central Asia, and the Americas.  There will also be smaller versions in London, Toronto, Dearborn and Los Angeles.  The one in Karbala itself will be a major target for Daesh or other Salafists, and maybe the overseas ones will also be targets of terror.  I wonder if the Iraqi Army and Iraqi state sponsored militias will hold off on using more units in retaking Mosul until after Arba’een is over so they can provide security in Karbala and Najaf?  Or conversely, will they perhaps try to speed up Mosul Ops to declare victory before Arba'een is ended?  But I don't believe they have enough time to do that before the 20th.
It all started with the Battle of Karbala.  Not the latest one in 2007, when the Mahdi Army clashed with gunmen of the Badr Brigades.  That fight was essentially a power struggle between Muqtada al-Sadr and Nouri al-Maliki as to who would provide security for the pilgrims from the danger of Salafi jihadist bombers.  They and their followers essentially went to war with each other for the honor of who would be the ‘Defenders of the Faith’.

Not the one in 2003 when the 3rd Infantry Division and supporting armor and air fought the Medina Division in the Karbala Gap and the 101st Airborne took the city itself from the Fedayeen Sadaam and foreign volunteers and mercs.  An American strategic deception operation had been put in place to convince Sadaam that the 4th Infantry Division would assault northern Iraq from Turkey.  That deception apparently worked as Qusay Hussein ordered many of the Republican Guards to be re-deployed from Karbala to the north of Baghdad.  Lt. Gen. Ra'ad al-Hamdani, who commanded the Karbala Front, protested and presciently predicted Baghdad’s quick fall because of Qusay’s order.


Not the one in 1991 when the Medina Division shelled Karbala with tanks and artillery for a week in order to suppress Shia uprisings.  They destroyed entire neighborhoods, killing thousands.  That was one of the incidents that led to Operation Southern Watch which imposed a useless No Fly Zone below the 32nd Parallel.  That NFZ was ineffective because there were no friendly units on the ground below it to keep Sadaam's ground troops or attack helos from persecuting the Shia again.   The NFZ over the Kurdish regions in the north worked much better as the Peshmerga could counteract Sadaam's ground actions.

Not the 1849 siege by the Ottoman army in order to reassert the Sultan's authority over the city.  They killed approximately 15% of the city population.

And not the 1802 sack of the city  by 12000 Wahhabis.  They killed a few thousand residents, ransacked Husayn's tomb, and needed 4000 camels to carry home the loot. 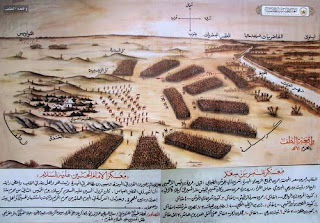 The original Battle of Karbala took place over 1300 years ago in the year 61 of the Islamic Calendar (680 CE).  Husayn, his family and a small group of followers were defeated by a several thousand man Syrian Army of the Umayyads.  Husayn and at least 72(?) were beheaded.  14 of the 72 were liberated slaves including a Christian, John bin Huwai, who died fighting for Husayn.  The name the “Prince of Martyrs” has long since been a title given to Husayn.  That battle has been made the subject of a historical religious movie by award winning Iranian film director Ahmad Reza Darvish.  It has English subtitles.  Darvish also had help from major British film studios and Academy Award nominated Indian film editor Tariq Anwar.

There are also scores of videos on YouTube showing more detail on the actual Arba'een pilgrimage walk.  One worth seeing IMO (and less than four minutes long) is https://www.youtube.com/shared?ci=BIv4ofSz7_0
Posted by mike at 6:31 AM