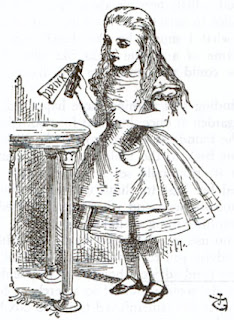 But I don't want to go among mad people,
said Alice.
Oh, you can't help that, said the cat.
--Alice in Wonderland,
Lewis Carroll

Ah, people ask me questions
Lost in confusion
Well, I tell them there's no problem
Only solutions
--Watching the Wheels,
John Lennon

This week The NYT reported above the fold:

Hillary Clinton assails the Director of the U.S. Federal Bureau of Investigation and calls his actions, "deeply troubling", as though she is a person of some legitimacy. As though the "investigation" is the problem, and not the problem.

As though even the President of the United States, if he comes under investigation, has the right to shut down a legal investigation into possible criminality associated with his person. (See former President Richard M. Nixon vis-a-vis Leon Jaworski.)

The takeaway is clear: The next President calls "foul" on a police agency for investigating her possible malfeasance. Mr. Comey's action is basically like a gnat on a cow's patootie. A "swoosh" of the Clinton-DNC machine's tail, and it goes away. A done deal.

Just like CNN's Donna Brazile got thrown under the bus for secretly funneling debate questions to Mrs. Clinton, so Mr. Comey's time may be drawing nigh. Lots of people have to exit stage right to pave the way for Mrs. Clinton's ascendency to the Presidency.

Understand: it is not the actuality of the investigation and the very real possibility of serious wrongdoing on Mrs. Clinton's behalf which should trouble any of us. It is the temerity of the F.B.I. director to do his job.

Not allowable! Now, of course, compare Clinton's entitled posture to that of an excoriated Trump who would not say if he would concede the election if he were to lose when asked the question by Mrs. Clinton in a debate.

Mr. Trump is skewered as being a dangerous obstructionist to the result that must occur; he is, in so many words, off his rocker. And of course, the same question is never put to Mrs. Clinton, because we all know she will be/is the next President, right? No election needed.

For perspective, if Mr. Trump is accused of groping by a much lesser preponderance of evidence than that held by Mr. Comey, he simply IS a groper. And that's about the baddest thing a person can be, in this time of Nirvana. Q.E.D.

This is because he has the temerity to run for the highest office in the land without the correct associations.

I am reminded of the saying, “Is it paranoia if they really are out to get you?”

I suddenly had a vision of myself like Heinlein's Stranger from a Strange Land, dropped into this country one year ago. I envision myself with antennae with golf balls on the ends; I eat only a food spread, like Nutella or Vegemite -- straight from the jar.

I am familiar with the history of great nations over the past 200 years. I am told to make sense of the news coverage of the U.S. presidential campaign:

It is clear that a man named “Trump” is an unwelcome intruder to the process. There is only one electable candidate, Mrs. Clinton.

It appears that Mr. Trump has her by the snatch, like an Iron Maiden, and she is trying to escape. He is large and threatening, like King Kong, and the press wonders how he was “created”, much like Dr. Frankenstein’s monster.

He is a Bad Man ® -- a title given to other national leaders who were “taken out” over the previous 13 years. Against the odds, he has crawled out of the primordial ooze to become his party’s candidate (though mostly, they do not recognize him.)

If elected, he will upset the international clock. Planes will fly backwards and the dead will emerge from their caskets, ready to danse macabre in celebration of Klaatu.

The great horror will occur at his swearing in, when he will unzip his human carapace and reveal himself to be one of David Icke’s Lizard People. (Yup, I’m ready to rack muck for Gawker or HuffPo; no pay, thanks.)

Only the voters who favor him see him. However, they are being vigorously prodded to see the light and understand that they cannot vote for him.

This is obviously a time of revanchist goddesses, led by a matriarch with an unfortunate stridulous quality to her voice. The fact that there is only one viable candidate is reminiscent of Stalin's USSR. Oddly, this nation fought a 60+ year Cold War against that Soviet system.

Well, that was scary. When I re-inhabit my body, I see a country in denial. They have surmounted the last great civil rights barrier in 2015 when gay people achieved the right to marry. There are no more Great Rights Issues to be won. And yet, the country is a far piece from Nirvana.

That unrealized dream may be what irks them the most, and that is why there must be a Trump scapegoat.

So the crusaders must now turn their walrus tears to the inhabitants of other nations. They must act as if the Civil Rights era was a great success.

Somehow a person called Donald Trump made it through the chicken wire. He is a threat to the simulacrum of the dream, and so he must be crushed.

Presumptive-President Clinton proclaims in her mincing, screeling voice that she will stomp all over wid her "nasty feet". The image of her and BFF Liz Warren tripping the light fantastic in their sensible shoes is almost too much.

It is just all very strange to me.

[cross-posted @ Rangeragainstwar.]
Posted by Lisa at 8:00 AM