Isla de Vieques was the closest I ever got to Castro's Cuba back in 62 during the crisis.  Beautiful place back then even though it was being used as a bombing range and an amphibious exercise area.  It must be twice as beautiful now that much of it has been turned into a national wildlife refuge and the landing beaches into tourist havens.   I have a hankering to revisit, who wouldn't?  Balmy Caribbean breezes, latin music, PitoRico rum with lime juice, palm trees, sandy beaches, snorkeling,   Although I would not want to go back through the surf inside an AmTrac.  Or by C-130 either, the cattle had to be chased off the dirt strip that served as an airfield before take-off or landing.

And it was where I first heard the sweet songs of Celia Cruz also known as <i>La Cubanisima</i>.   Not this particular song perhaps, but many like it. 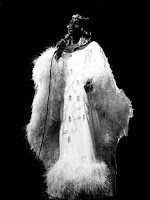