Puling Back the Curtain 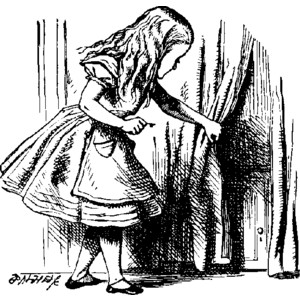 --Pulling back the curtain

I really mean to learn
'Cause we're living in a world of fools
Breaking us down
when they all should let us be
--How Deep is Your Love,
Bee Gees

Sitting on a sofa on a Sunday afternoon
Going to the candidates' debate
Laugh about it, shout about it
When you've got to choose
Every way you look at this you lose
--Mrs. Robinson,
Simon and Garfunkel


We like to keep things Ranger Simple, here. Simplicity, if not elegance, Leads The Way. Jes tryin' to wrap our helmet around things . . .

So we have some Ranger questions:

1) Why is candidate Trump lashed for looking toward favorable relations with Russia and her president, Vladimir Putin?

Did not the United States wrap up 60+ years of a costly and contentious Cold War with great hopes of normalizing relations one day with Russia (much as Nixon and Kissinger achieved with China)? What was all of that "Mr. Gorbachev, tear down that wall!" shtick about, after all?

First, the Nixon-era thaw (détente), then Mr. Gorbachev's Perestroika and glasnost. What -- all gone like so much pipe smoke? Back to frenemies, or worse? Why are we demonizing Russia?

Politics is about statecraft, and that used to be about realpolitik. It doesn't matter if they are Bad Men ™ . President George Bush, et al., were Bad Men from many people's perspectives. But you must deal, and politics is the art of the deal, with a good measure of craftiness, shrewdness and charisma, for good measure.

Would it not be a good thing if Trump were to enter Office with a favorable view towards one of the world's major players? To extend the thought on Mr. Trump's appeal to members of the Old Boys Club, he would probably do great with North Korea's Kim Jong Un, too, thus knocking out two Bad Guy ™ threats with one stone, as it were.

Like Dennis Rodman, Trump has that yellow mop reminiscent of David Bowie in his Man Who Fell to Earth phase. Send Mr. Trump a-visiting NOK with a nice boxed set of Emmenthalers and a stadium parka and insignia ski cap -- like Vice President Cheney wore at Aushwitz -- and you have now lowered the world's fear from two of its Big Bad Bears. 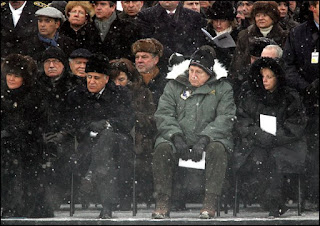 --VP Cheney dressing down at Auschwitz

I can see a Trump success with both leaders. If they are the major amorphous threats that the news would have us believe they are, that would be a coup for the new administration and our nation.

2) Why the misinformation that Trump would be a loose canon on the issue of a nuclear first strike?

All liberal news outlets allude to this supposed threat. However, the fact is that Mr. Trump has uwaveringly said he would NOT make a nuclear first strike. His opponent Mrs. Clinton refuses to say the same thing.

As Andrew Bacevich wrote, "Hillary Clinton chose a different course: she changed the subject. She would moderate her own debate.  Perhaps Trump thought Holt was in charge of the proceedings; Clinton knew better."

The closest Mrs. Clinton comes to addressing the nuclear issue is to say that when the President hits the button,"there are four seconds to detonation," and further, that the ten people overseeing the warheads like her better than Trump.

Go figure. The job of overseer must be a boring one, and the prospect of "lighting them up" must provide some interest.

Mr. Trump is an American Goniff, and Americans like that. The people like humor and accessibility, qualities which Mrs. Clinton lacks in spades.

Mr. Trump has given 80 interviews over this election season to The New York Times; Mrs. Clinton, two. She does not open her plane to journalists, a long-standing practice of Presidential candidates. She is closed to The People, a cipher.

Why the infinite jest? Perhaps this a function of everyone having a megaphone (i.e., a media feed and a social platform).

People think they are part of the newsmaking apparatus. Because their particular shtick streams to them personally each day, they feel on par with those newsmakers who unload their opinions. The recipients then perpetuate the shtick-as-fact.

My father writes for the media (not political), and he called the election for Trump over a year ago. My mother has a visceral dislike of Mrs. Clinton. My parents are both predominately Left Independents. So for me, keeping an open mind is not difficult.

However, over the past few months in my university courses, professors have been shamelessly deriding Mr. Trump. They have encouraged their students to get out the vote (for Mrs. Clinton, of course.)

Last week my instructor asked if anyone would be attending the anti-Trump protest rally in town; if so, class would be dismissed early. I was dumbfounded, and felt like perhaps someone in a fascist society might feel. Certainly, it was not a safe environment in which to offer a dissenting opinion.

It's really all about what we will allow. Will the dynastic hopefuls fall in line and support a President Trump, giving him all the support and goodwill needed for a successful administration should he win the election?


Not if the press has anything to do with it. But the press is like the police: there are many more of us than them.

If we can re-inter our brains in our braincases, we will vote our conscience and react to the election results like sane citizens used to do. We would tell the screeching harridans of the press to piss off.

The man Trump is a serious candidate. What is so good about Clinton; what is so bad about Trump?

If we were better than we are, we would turn away from the spectacle, eyes firmly affixed to real life.
Which is to say, to life.

[cross-posted @ Rangeragainstwar.]
Posted by Lisa at 8:30 AM