They Shot Their Trump Card 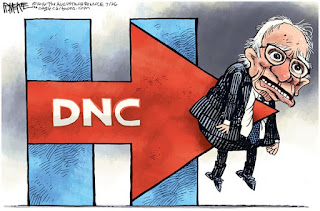 Shut up Kyle!
Shut your Goddamn’ Jew mouth.
You’re the reason that there's war
in the Middle East
--South Park

That's just the way it is
Some things will never change
--The Way It Is, Bruce Hornsby

It was recently revealed that the Democratic Party (i.e., the Clinton campaign) attempted to discredit Mrs. Clinton's sole opponent, Mr. Sanders, by disseminating the word that he was an atheist, instead of Jewish (which he in fact, is.)

Are we to believe that dismissed Democratic National Committee chairwoman Debbie Wasserman Schultz was to blame for the dirty doings in order that Mrs. Clinton may not have still more smut attached to her already tetchy image?

As the first Jewish congresswoman elected from Florida and a hard-working graduate of a Florida state school, it strains credulity to believe that Mrs. Wasserman Schultz would sink so low against one of her fellows.

Unless she is a pathologically self-loathing Jew, she alone did not hatch this plan but was directed to do so by higher ups. Remember, Mrs. Wasserman Schultz was Mrs. Clinton's campaign co-chair in Clinton's unsuccessful 2008 presidential bid. Old loyalties die hard.

I did not know Mr. Sanders was Jewish, but it is now obvious: his campaign was doomed to failure out of the gate. Anyone in his right mind knows that a Jewish quasi-Socialist will not win election to the presidency of the United States. Whether atheist or Jew, does it really matter as far as unelectability for the Presidency in the U.S.?

Vermont is another country; a Jewish -Socialist can be Senator there but in few other places. What were they thinking? Fronting Sanders seems a put up, to make it APPEAR that we have a viable democracy in the United States. After all, it would be unseemly for Mrs. Clinton to run opposed. Too Banana Republic; too Soviet.

But Mr. Sanders was never a viable candidate, and that he won as many votes as he did is a measure of the dissatisfaction of the electorate. A vote for Sanders was a no-confidence vote against Mrs. Clinton (who was the presumptive nominee from the start.) Sanders was the Democrat's Trump, and now they have none.

Who would be Mr. Sanders' constituents, he, an older white, Jewish man? He does not command the black vote nor the meso-feminist vote, which goes to the establishment Mrs. Clinton. He would not even corner the small Jewish vote.

Bernie got as far as he did on the disaffected lower-middle class white male and female vote -- precisely those who chose the non-establishment Trump on the Republican side.

You who voted for Sanders may think that spending their time also disdaining Trump was time well spent, but you have no candidate now. You drank the cherry Kool Ade Mrs. Clinton mixed for you, and now you have nothing. For the liberal True Believers, the best they can say now is, weakly, "We must not have a Republican".

It is a measure of the yearning of the Democratic base for something other than the Clinton dynasty that Mr. Sanders was able to garner such a following, and a damning reveal of the desperation of the Clinton group to even attempt the smear of Mr. Sanders.

Jews in the U.S. may hold positions of authority which exploit their humor, intelligence, wit and capabilities. You may have your Rahm Emanuels, Judah Benjamins and Admiral Hyman Rickovers. Jews have won many Nobel and Pultizer Prizes, served as Supreme Court justices and served admirably in the armed forces (though after World War II they often could not be hired in the peacetime industries in which they had distinguished themselves during war because of anti-Semitism.) Hillary Clinton's daughter is married to a Jew. They may be doctors and lawyers, but not Indian chiefs.

Anti-semitism is the last great unbreeched bigotry in this nation, but we do not recognize it because Jews' successes are so outsized to their small numbers.

The boundaries to holding the office of Presidency will be breached in the order in which they were laid: First, a black man (15th Amendment), then a woman (19th Amendment). But before a Jew will be every other minority. Today, an Arab-descended Muslim man would be a good choice, a sort of holding out of the olive branch ("Sorry about that whole war thing.") Following Barack Hussein Obama, it is not far-fetched.

However, he will have to be Muslim in the way that Louisiana Governor Piyush "Bobby" Jindal is Indian: fully Anglicized, Hart Schaffner Marx, hair waxed and parted on the side. This will demonstrate the movement toward homogenization which is a necessary good today.

So it will be a woman after the first black President (who was quick to assure voters that he was Christian, and not Muslim, like his father and stepfather.) But should it be this woman, so freighted with problems of her own making, done in the name of clawing her way to the top?

In light of the recent revelations, Mrs. Clinton shows herself to be despotic and tyrannical, moreso than her Republican opponent has ever had the opportunity to be. She should be held to account, versus making her lady in waiting take the fall.

But this, the press will not allow. They have made our choice for us.

[cross-posted @ Rangeragainstwar.]
Posted by Lisa at 11:54 AM