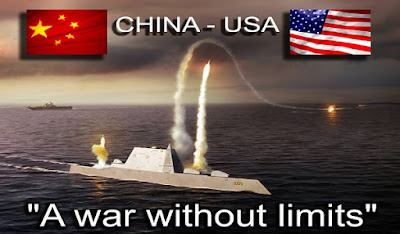 From Future Warfare in the Western Pacific (Biddle and Oelrich, 2016):

"This article thus provides a more systematic assessment of the potential military effectiveness of Chinese A2/AD (anti-access area denial). We ask not whether ASB would be escalatory, but whether it is necessary. That is, to what extent will ongoing technology trends allow either side to deny freedom of movement to the other, and over what area? Will China be able to push U.S. forces far enough from its shores to threaten U.S. alliances? If so, which ones, and how gravely? And what, given this, represents the best military strategy for the United States to adopt for the long term?"

One of the most common complaints I've heard, both here and from other former military types, is that the exclusive concentration of resources on "little war" expeditionary-force and internal defense of client-state governments has left the United States armed forces unable to successfully respond to a peer foe in a conventional war.

Biddle and Oelrich (2016) is an attempt to analyze one element of what may be one of the two potential peer-foe conflicts; a predominantly naval/air war between the United States and its allies against the People's Republic of China (PRC); specifically, what potential does the PRC's pursuit of A2/AD systems - "...missile launchers, command posts, sensors, supply networks, and communication systems..." - have for creating a "Greater East Asia Co-Prosperity Sphere" centered around mainland China, one that is robust enough to control the West Pacific rim in the face of a United States assault?

This seems like an interesting enough question to suggest reading the linked paper and discussing in the comments section. So...hopefully you will enjoy the exercise and come in weapons free.