Interesting study (Dell and Querubin, 2016) released this summer on some effects of "kinetic warfare" (i.e. bombing, shelling, and strafing) in the RVN in 1969. 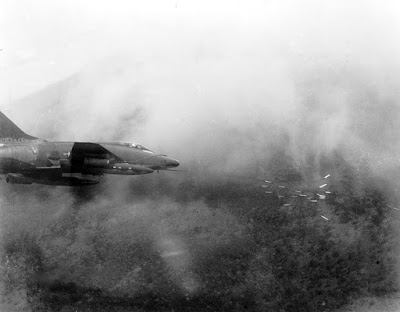 The study's conclusion should surprise none of us who have watched the "more rubble, less trouble" approach to the Middle Eastern problems over the last two decades or more:

In other words; bombing the living shit out of people pisses them off and makes them LESS likely to go along with whatever cunning plans you have for winning their hearts and minds, or grabbing their balls, for that matter.

How well this study conflates with the current enthusiasm for various Western polities' for bombing the shit out of the Middle East is difficult to assess. But it certainly does seem to suggest that John Paul Vann may or may not have been right about the best weapon for suppressing rebellions but he seems to have been absolutely correct about the WORST.
Posted by FDChief at 9:16 AM