Towards a General Line in Regards to US Political Reality 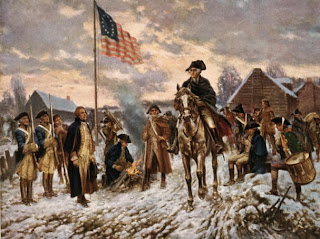 Another one of those Virginians, George Washington at Valley Forge

Recently I commented the following on Colonel Lang's blog:

"Let us not let the Zionists make fools of us in their pursuit of absolute security."

What a clear and yet profound statement Colonel! I can only agree, but at the same time, given the level of manipulation that seemingly pervades our discourse, how are we as a nation, as a political community, to see fit to identify our own political interests? Such a simple thing, yet so difficult in practice!

On various occasions I have taken the insights I have gained here and attempted to expand them further on the blog I share with others of like mind. We are all very much indebted to you sir as both a mentor and a source of inspiration. Whatever the outcome of this, there are legion out here that do hear and understand.

Notice that I have implicated all here in my statement, and without even having asked before hand! Was it the emotion of the moment?, the power of the vihno? or something else entirely, say something with nothing to do with US politics?

No, I think it none of these. Rather I wished to make a statement which brought together several different observations I've made over the last couple of years, these being:

* We Americans are in the midst of a profound political crisis, probably the most serious one we have ever faced as a political community.

* This crisis consists of a whole series of systemic failures which include the political, the economic, the strategic/intellectual, the moral . . .

* The current US elite holding de facto power, call them the "Empire Party" are anti-democratic, anti-intellectual, anti-Enlightenment, and radical in their views and intentions for the future of this country. They attempt to pass themselves off mostly as "conservatives" or even at times as "progressives", but their words are consistently betrayed by their actions. Their actions see the means of US government power as a tool to their own enrichment, they use public funds to enrich themselves and promote their own narrow interests.

* The Empire Party has a powerful propaganda instrument in their hands which is used effectively to confuse the citizenry. This propaganda has a significant ideological element which is especially "Libertarian" and Radical Right wing, yet most of those under the influence of this political propaganda do not gain anything through its goals or even benefit from the system in general, rather suffer under it in a variety of ways. The mass of supporters are essentially stooges to be manipulated at will for the interests of the cynical elite. Part of the propaganda mix is a pseudo-religious affiliation with Right-wing Israeli policies, although affiliation with other like-minded foreign interests is assumed.

These are my views, not necessarily those of anyone here or of Colonel Lang, although regarding the former I suspect that we barkeeps are overall in agreement for the most part. This would cover a significant amount of those who comment as well.

So why comment what I did on SST? In the title I use the term "General Line" and that refers to a concept from Marxist/Leninist thought although I use it differently. The General Line in communist terms was the general program of the party which had been decided on by the party leadership and had to be adhered to by all members. Not to do so was to deviate either to the "left" or "right" and face the possibility of being expelled from the party, at the least. My meaning here is not this, but more the nature of "a path forward" instead of a thoughtout program. Which means we could come from different points along the political spectrum and agree on certain current views and see (and follow) a similar path forward. Deviation is this case would be natural and sometimes enlightening, but rejoining the fold would remain a possibility, unlike in the communist system. Also there would be the sense of being part of a movement which is something the opposition to the Empire Party sorely lacks.

I have found the views expressed by Colonel Lang and his associated writers to be professional, thoughtful, insightful and roughly in line with my own views of the current situation, but possibly lacking the harder edge that exists in the four points I mentioned above (that is I may be more radical, although I make no claim of objectivity in that regard - it's more just a gut feeling). Colonel Lang has consistently shown me aspects of this reality I was either unaware of or lacking in the perception to take on and for that I am thankful. I will continue to comment on his blog and use what I have learned there to further expand here. In all I think we are all part of a movement to take back our country and to understand our current harsh political reality. If I have offended anyone by my actions I regret that, but can only add that was not my intention.

I'm very interested in ya'lls take on all this.
Posted by seydlitz89 at 6:44 AM