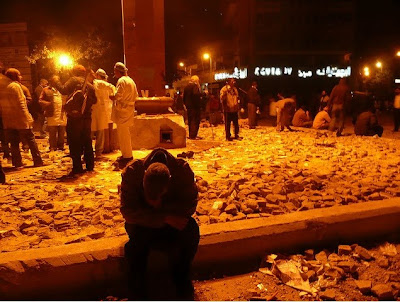 I know this isn't a U.S. foreign policy site and I know I've been posting WAY too much about the current Egyptian situation, but...

I'm bird-mesmerized-by-snake fascinated by the dynamics of principle and power at play here.

Some time ago I thought that the end was clearly in view. The Egyptian Army had publicly refused to shoot down the opposition. This is typically The End for strongmen. It was when the Iranian Army stopped shooting the anti-Shah demonastrators that the Pahlevi "dynasty" was finished. When they knew that they couldn't trust their armed forces to protect them the Ben Ali forces were done in Tunisia just last month. So when Mubarak's Army stated that it would not shoot at "the Egyptian people" it seemed like a public endorsement of the end of Mubarakism.

Mubarak has unleashed the "nuclear option" in the form of his own personal Basij. In this the Army has been at least complicit, and at worst supportive; soldiers around Tahrir Square have not stepped in to stop the counterattack, and while they have not shot at "the Egyptian people" they are clearly not interested in stopping others from doing so. So it now appears that the generals are hedging their bets to see if Mubarak's strongarm tactics will work.

The real loser here, regardless of what happens, is likely to be the U.S.

Given the position the U.S. has publicly taken there must now be some significant pain for the Mubarakites comensurate with their escalation of violence. This may be assumed to be the Obama Administration taking some harsh steps; cutting off all aid, or at least military aid, expelling Egyptian officers and troops from U.S. training courses, ending commercial and military ties.

Mark Lynch, who spends a good deal of time thinking about this area, says that the U.S. "...has no choice." but to do this:

"It must now make clear that an Egyptian regime headed by Hosni Mubarak is no longer one with which the United States can do business, and that a military which sanctions such internal violence is not one with which the United Staes can continue to partner. The Egyptian military must receive the message loudly, directly and clearly that the price of a continuing relationship with America is Mubarak's departure and a meaningful transition to a more democratic and inclusive political system. It must understand that if it doesn't do this, then the price will not just be words or public shaming but rather financial and political. If Mubarak remains in place, Egypt faces a future as an international pariah without an international patron and with no place in international organizations or forums."

I can see several ways that this will end badly;

1. Mubarak chooses, rather, to leave the U.S. orbit, and survives. We have a precedent here: Saddam post-1988. Not sure if we want a pissed-off despot with a chip on his shoulder alive and active in the eastern Levant.

2. Mubarak chooses to leave, and falls, but in such a way that his successor takes the credit rather than the U.S. Even worse, this successor may remember not the final dismissal but the years of U.S. support that preceded it.

3. Mubarak stays, acceeds to the U.S. demands, steps down, but is either succeeded by an Egyptian nationalist who chooses to focus on that U.S. support for his predecessor...or an outright radical...or no one - the national dissolves in chaos.

Over all I tend to agree with Lynch. If the U.S. fails to put the blocks to its client now it will forfeit any rights on the subject; we will be exposed as arrant liars and fools, we will look like the organ grinder made to dance as the monkey turns the handle, the slavemaster who bullies and threatens but cannot stop being defied and mocked by his own chattel.

But I think the lesson learned here is that any democracy that plots to make themselves "safer" by aiding in the oppression of others does, or should do, this with open eyes and the understanding that if you side with the slavers you should expect no mercy when Spartacus stands in your doorway with the sword red in his hand.
Posted by FDChief at 3:56 PM