Getting Called on the Double Down

Here's what I wrote yesterday:

"It appears that Washington's Egyptian "ally" has told Washington to stuff it and intends to double down on their Mad Police State Skilz. 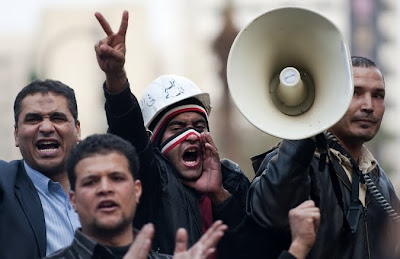 One thing that baffles me about this is the goal of the Mubarakites.

I have never got the sense that Mubarak was Saddam, or Baby Doc, or Mugabe. He has always seemed to me to be more like Galtieri; just the face on the junta, the primus inter pares. I always thought of Egypt as an oligarchic kleptocracy rather that a cult-of-personality state. But such a state would have, you think, responded differently to this. If Mubarak was just the figurehead, why not let him go? You have the new boss, Suleiman, same as the old boss. The oligarchs make some cosmetic changes, the Mukhabarat quietly dissappears the leaders of the protests, game over.

How does this latest poke-in-the-eye-of-the-protesters help?

The other thing I don't understand is how the U.S. strategy is supposed to work.

It seems like Washington has done just enough to piss everyone off; pushed the Mubarakites on the succession and the Emergency Law, pushed the protestors to take Suleiman as the best possible deal. Assuming that the current balance of power solidifies the Mubarakites are likely to remember resentfully that the Americans tried to push their man out of the boat, while the protestors who survive will likely recall that when they could have leaned hard on the government - announcing the large aid subsidy would be cut - the U.S. mumbled instead of roared.

For the record, I think that the Egyptian oligarchy has, so far, conducted a prize-winning despotism. They have done just enough to baffle their opponents while keeping their foreign patron on the string and keeping the dometic pot from boiling over. The real winner here, as always, seems to be the Egyptian Army, who appears to have succeeded in playing both sides. Shrewd. 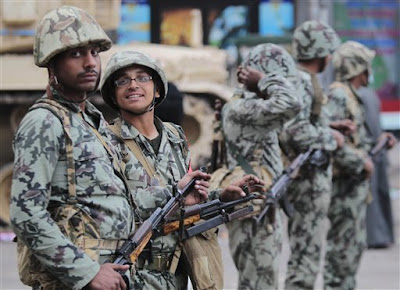 Enh. Hard to say; I'm not sure how you could "win" this one, other than start by not playing back in 1948. But there's losing and losing, and right now, with Mubarak's footprint on our ass, it seems to me that we look kinda ugly."

What a difference a day makes!

Mubarak resigns, transfers power, not to his bobo Suleiman but to Field Marshal Mohammed Hussein Tantawi, the country's defence minister as the head of the "Supreme Council of the Armed Forces". Minimal bloodshed, and it looks as thought the Egyptian people may have actually forced their government to make some genuinely democratic changes.

I have no way of telling how much the U.S. helped in doing this. I would observe many commentators have stated that the U.S. Army, whose ties with the Egyptian Army go back to the Eighties, is supposed to have been working very hard to help keep the Egyptians from going all Tianenmen on their people. If this is so, and I have no reason to doubt it, then my Army deserves part of the credit.

This is certainly not the end. It's not even the beginning of the end. IT may not even be the end of the beginning. But at least the seems, for the moment, some promise that the one thing that so many of us in the West have hoped for might have happened; an Arab dictator has been forced out of power without invasion, without chaos, without revolution. 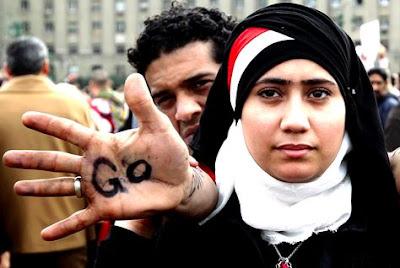 I hope this works out, for everyone's sake.
Posted by FDChief at 1:52 PM