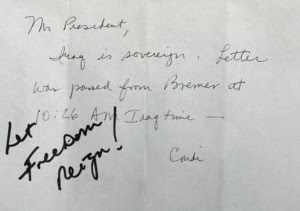 That seems to be the official U.S. position on the "soft coup" that occurred today in Tunisia. For the record, after several weeks of increasingly large protests the government of Ben Ali has fallen, with a "caretaker" PM in place and elections promised shortly. This was after Ben Ali's move to fire his entire government and end media censorship (the Tunisian government has been furious with Al Jazeera for publicizing the protests) didn't cool the frustration and anger against his rule.

Mark Lynch goes on to point out that "..(d)espite being one of the most repressive and authoritarian regimes in the region, Tunisia has generally been seen as a model of economic development and secularism. Its promotion of women's rights and crushing of Islamist opposition has taken priority in the West over its near-complete censorship of the media and blanket domination of political society. Indeed, the United States has cared so little about Tunisia's absolute rejection of democracy and world-class censorship that it chose it for the regional office of MEPI, the Bush administration's signature democracy promotion initiative." Now the government has fallen. This may not be a problem for the U.S....or it might, depending on who rises to power.

But, again, the U.S. never seems to miss an opportunity to miss an opportunity in this wretched region. Both Bush and Obama made feeble rhetorical gestures towards the notion that the U.S. wanted "freedom" and "democracy" in the Muslim lands. But when it came down to nut-cutting time, what mattered was what had always mattered and, apparently, what still matters; "stability", and the ability of an Arab government to repress the Islamists, regardless of the means and methods it uses.

The White House presser is the expected bland statement of the Administration's hopes for democracy, human rights, and, presumably, magical ponies for everyone. The President states that "The United States stands with the entire international community in bearing witness to this brave and determined struggle for the universal rights that we must all uphold, and we will long remember the images of the Tunisian people seeking to make their voices heard." without a peep about how the U.S. was perfectly willing to let the Tunisian policemen break the heads of the brave and determined strugglers if those strugglers were struggling for an Islamic state. 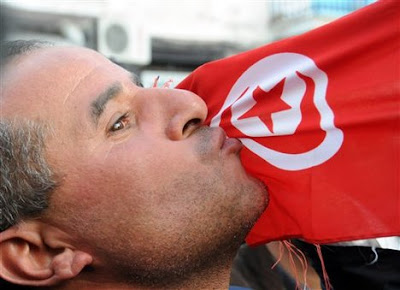 One of the things that has frustrated me about the U.S. Middle East policies for some time is our apparent inability to see that we can't keep our Arab proxies' foot on the manhole forever; the Islamic steam will just build up until, as it did here, it will explode. Repression works, for a time. But we keep running into the limits of repression again and again. Why don't we learn from this?

Well, it's too late now; we'll hove to see whether the dysfunction of Tunisian politics is reparable, or whether Tunisia stands to go the way of Lebanon. 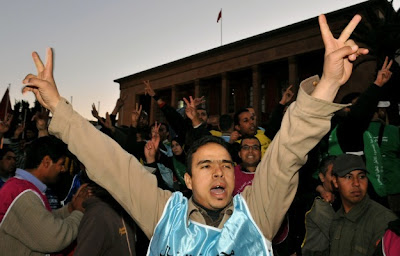 It seems like my country is always willing to spend millions for defense. Would it be too much to ask for a couple of cents for some tribute to some foreign policy nimbleness? A little geopolitical creativity?
Posted by FDChief at 4:06 PM