The Legacy of Ronald Reagan? 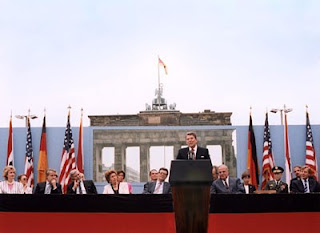 Seems that the coming 6th of February is the Centennial of Ronald Reagan's birth. I've been invited to participate in a roundtable discussion of the 40th US President over at Chicagoboyz. I've been thinking about what to post, and haven't come up with much so I thought I would run if by my fellow barkeeps and our loyal clientèle and see what ya'll got to say about the subject.

I was in the audience during that particular Berlin speech, maybe five rows back and was very impressed at the time. He was of course addressing not only Berlin, but the whole world. I had voted for Reagan both in 1980 and 1984, but the gross illegalities of Iran Contra with commissioned officers destroying documents and refusing to answer questions or outright lying before Congress, not to mention the actions of Congressional Republicans in their lock-step support of these crimes, was too much for me and I left the Republican Party in 1986. I thought Ollie North should have been busted to private.

*The ending of the Cold War, but the continuance of Bacevich's "Washington Rules", which is a bit outside of Reagan's time, but his influence is still important.

*Ronald Reagan as the first real TV-age president. How image triumphed over substance? Some say that JFK was, but I think Reagan beats him.

*The redefinition of "conservative" as in what has become the Radical Right of today. "Government is the problem", but "government" redefined and limited to social programs. Massive defense and security spending is OK, but "government" seemingly does not include these aspects which form a sort of state socialism, that is seen as a normal and unquestioned "duty" or "obligation" of the state for unlimited intervention.

*Finally, and this is linked especially to the third point above, the hollowing out of government control over military/intelligence activities. Since William Casey, Reagan's DCI, we have seen a growing tendency to "outsource" certain questionable activities to preclude public scrutiny. This was a hallmark of Iran-Contra and it did not end there. The rise of Private Military Companies (PMC's) goes with this. From a Clausewitzian perspective this indicates a loss of material cohesion for the political authority, as well as numerous unintended consequences should the mercenaries gain too much influence. I see this as an element of the consolidating police state I have warned of.

All thoughtful comments are welcome. I'm looking for inspiration and I think I've come to the right place . . .
Posted by seydlitz89 at 9:56 AM