As part of the massive GOP performance art project to convince their idiot rubes base that the patrie is en danger of being overrun by hordes of illegal flesh-eating zombie immigrants (or something) the Trump Administration has announced that it will cut off all aid to three Central American (or, "Mexican", as we MAGAts like to call them) nations; Guatemala, Honduras, and El Salvador. 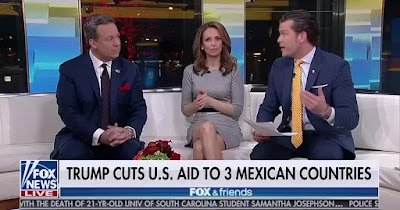 We can save a lot of time and nonsense by beginning this discussion with the acceptance that there is no actual "border crisis", that immigration is not an existential threat to the United States, and that anyone who attempts to convince you that #1 and #2 are actual things is trying to sell you something rather like a bridge, or some Nigerian oil minister connections.

The thing about this, though, is that given the conditions on the ground in central America this is either the stupidest Stupid Trump Thing Ever or perhaps the most cunning of Steven Milleresque Cunning Plans.

Life in much of Central America is pretty Hobbsean; nasty, brutish, and short. We, the People, own a shitload of the responsibility for that, given our repeated and malicious meddling in Central American affairs ranging from the support of loathsome caudillos from Arias through Somoza to Rios Montt all the way back to the diddling of American corporations such as United Fruit and the filibustering of William Walker.

One of the main reasons there ARE troubles south of the US-Mexican border is because the U.S. has helped ensure that conditions in those places - never conducive to good government and social stability to begin with, given their Spanish-colonial and post-colonial history - have made it difficult for the locals to simply survive.

When I talked about this almost ten years ago I pointed out the obvious:

"The real issue - the one Which Dare Not Speak Its Name - is that the institutional poverty, misgovernance and social maladjustment of most Latin American countries is so profound and so destructive that to address it would take every penny that the U.S. has spent on poorly planned foreign adventures and more. Much more.

So instead we get this idiotic argument that all we need to do is fence these little heatherns out and everything wil be Good. God will once again be White and in His Heaven, the food will magically get harvested, processed, cooked and served by Real (i.e. white) Americans who will suddenly, magically, want to work for the pittance we want to pay for these jobs to prevent our food, clothing and service costs from reflecting what it would cost to pay humans actually living wages to do these things.

It is your business when your neighbour's house is on fire."

If, indeed, your neighbor's house is on fire it would seem the heights of ignorance to turn off the little garden hose you've been using to help wet down the flames.

But that would be assuming that you WANT to put out the fire.

As I've also said here before; the GOP in its current incarnation has nothing substantive to offer the non-plutocrat/non-theocrat constituency. Its entire policy agenda consists of returning the U.S. to the social, political, and environmental conditions of 1899. A New Gilded Age, in other words, with everything that implies for those of us not Rockefellers, Goulds, or Carnegies.

So, if the GOP is to gain power in a representative polity it MUST present the temporarily-embarassed-millionaires with another reason to vote Republican. Hence the booga-booga scares about tricksy transgender ladyboys lurking in the girls' bathroom. Hence the frantic insistence in the God-given right to Own Every Semiautomatic Weapon Ever Made. Hence the - as here - insistence that the Browns are Coming To Kill Us All.

And I think this is what this is.

If you treat it as actual foreign policy it's blindingly moronic. You have internal problems in neighboring nations, so you ensure that the relative pittance you've been devoting to helping those neighbors ameliorate the problems doesn't get used as a lever to try and force their dysfunctional governments into being more functional, but simply goes away. You're not trying to solve anything with it. You're just pulling it out from under them.

But...if you treat it was a sort of stupid-person's-idea-of-a-smart-idea that's really intended to ensure that those problems continue and provide you with your immigration Reichstag fire?

That's actually a stupid kind of cunning. You're making trouble for your nation, but making political gains for your party.

And that, my friends, is the State of the Nation.