No, not Yevgeny, so you hockey fans of the Washington Capitols do not have to worry.  The speculation is that the Russian Navy may decommission their only Aircraft Carrier, the Admiral Kuznetsov.  She was launched 34 years ago and named after the Admiral of the Fleet and Hero of the Soviet Union during World War II, Nikolai Gerasimovich Kuznetsov.  She was built in a Ukrainian ship yard.  Her sister ship, the Varyag, was sold to the Chinese Navy and is now the Liaoning. 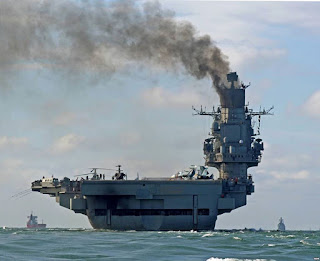 The Kuznetsov has had a troubled history.  While on her last deployment to Syria she had to be accompanied by an ocean-going tugboat in case of propulsion failure.  During that transit she belched out huge plumes of black smoke.   After returning to her home port at the Northern Fleet Base in Severomorsk she was transferred to a ship repair yard in Murmansk.  Plans were to replace her power plant and completely modernize her electronics suite.  Work was supposed to be completed by late 2020.  However, with the failure and sinking of drydock PD-50 in which she was being retrofitted, that may not happen.  In fact there is much discussion in the Russian press as to whether the retrofit is worth it and several have called for her to be decommissioned.

So, if she is decommissioned, the question in my mind will be:  Do the Russians know something we don't about the effectiveness and vulnerabilities of carriers in the 21st Century considering current state of the art in A2/AD weapon systems?   Maybe not.  They have proposed and reportedly started early design and development of a super-carrier of their own, the Shtorm or 23000E.  That carrier has been postponed by Putin.  But it is still part of the Russian State Armament 10-year plan.  Russian officials quoted in Sputnik claim construction on it will start sometime after 2024.  And they are talking of possible exports to India.

Too bad about the Kuznetsov.  The guy she was named for was an interesting sailor.  Born and raised in a small village near Arkhangelsk, the son of a Serbian immigrant father.  He lied about his age and enlisted when he was 15 as an able bodied seaman during the Russian Civil War.  He served with a Red Flotilla on the Dvina River.  I have to wonder if he saw action against Detroit's 339th Infantry during the North Russia Intervention?  Or against Brits, Canadians, French, and Italians who were also there?   22 years later as People's Commissar of the Navy he disregarded orders from Stalin and put the Navy on battle stations several hours before the start of Operation Barbarossa.  The Soviet Army and Air Force were caught with their pants down because of Stalin's paranoia that the British, perfidious Albion, were trying to get him in a war with Hitler and refusing to respond to Luftwaffe recon overflights. Some claim that Kuznetsov saved the Soviet Navy from destruction by that alert. 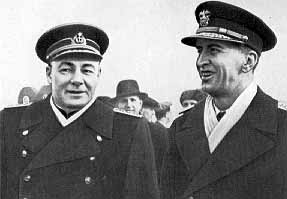 Kuznetsov was later (1947 and 48) put on trial by Stalin and demoted, then eventually rehabilitated.  In 1955 Zhukov removed him from his post.  Not until 14 years after his death was he exonerated of all charges, reinstated to his former rank, and perceived as one of the most brilliant men in the history of the Soviet Navy.  He has been praised for providing the ideas and concepts for building up a blue water navy during the 60s and 70s.  Even though those ideas were carried out after his fall from grace by schmoozer and political Admiral, Sergei Gorshkov, who had the influence with the Communist Party's Central Committee to pull it off.   To the left is a photo of Kuznetsov at the Yalta Conference in 1944 standing with CNO/COMINCH US Fleet, Admiral King.

UPDATE:  Kuznetsov was a prolific writer writing many books and articles on naval tactics and strategy.  And long after his death, his widow turned over much of his later writings to the press.  Unfortunately the only book of his translated into English that I know of is historical:  "Memoirs of Wartime Minister of the Navy" by Progress Publishers.  https://www.abebooks.com/book-search/title/memoirs-wartime-minister-navy/author/kuznetsov/

There are a few excerpts on the internet, for example: https://www.chakoten.dk/wp-content/uploads/2018/01/Excerpts-from-Admiral-N.G.-Kuznetsovs-MEMOIRS-OF-WARTIME-MINISTER-OF-THE-NAVY.pdf


UPDATE #2:  Looks like they will not put her out to pasture.

Yesterday Defense Minister Sergei Shoigu said that repair and modernization of the aircraft-carrying cruiser "Admiral Kuznetsov" will be completed next year.  “At the moment, work is being carried out in accordance with the master plan schedule. Technical readiness of the cruiser is 25%. Its repair and modernization is expected to be completed by the end of 2020, ” Shoigu said on Tuesday at a conference call at the Russian Defense Ministry.   He also mentioned several other Naval projects:  Two new Ivan Gren Class amphibious Assault ships, ten new stealthy Derzky Class corvettes, and two new Admiral Gorshkov frigates.