I've been out of touch.  Plus have been busy trying to keep up with the grandchildren.  And the grandchildren's children, ages from two to nine, amazing to me is where they get their energy.

Anyway, shown below is an Me-262A-1 Schwalbe (Swallow) of Adolf Galland's legendary Jagdverband 44.  This particular picture of it sitting on the tarmac at München-Riem is courtesy of Wolfgang Muehlbauer: 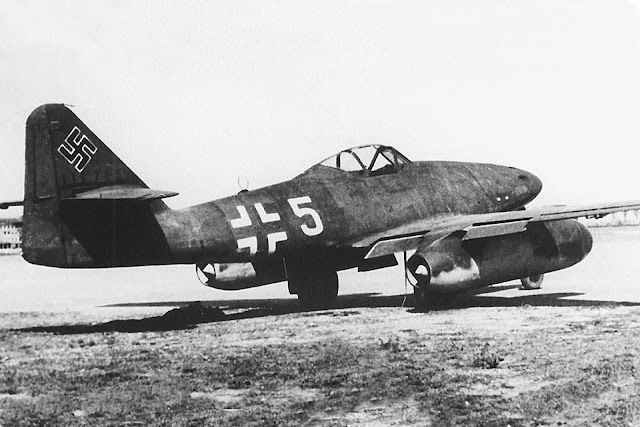 This specific ME-262, with the number five shown, is legendary itself.  It was flown by Unteroffizier Eduard Schallmoser and it lost its tail rudder during a close encounter with a USAAF B-26 "Martin Maurauder" somerwhere near Memmingen on 20 April 1945.  According to aviation author Robert Dorr, the pilot Eduard Schallmoser, parachuted to safety.  "Schallmoser said later that he landed in his mother’s back yard with an injured knee. Before heading back to the base and then a hospital, he enjoyed a plateful of her pancakes."

Lots of photos, artists renditions, and models of old number five.  Some autographed.  Seems fantastic.  Did it happen?   I love the story so I vote yes.  My grandson's father-in-law, a former jet jock is doubtful.  He surmises Eduard landed elsewhere and went home to see Mom before returning to duty?  Who could blame him?  What my great grandson wanted to know was did he get the Apfelküchle or the Kaiserschmarrn?  Below is a photo of Eduard next to his mother in the family garden. Photo courtesy of Downed Warbirds twitter account: 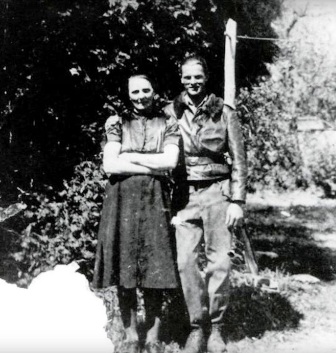