Interesting story on the history blog regarding Herodotus, who some called the world's first historian.  Others apparently called him a fabricator.  And I have to admit that when I first read the story of 'gold-mining-ants' in his Histories I suspected he may have had one too many cups of grape.

And his description of  Egyptian 'baris' boats on the Nile that had no ribs, and dragged a two-talent (~52 kilograms) stone behind them on the river bottom, and were made of thorn trees took a lot of ribbing by those doubters who didn't believe such a craft ever existed.  But he has at last been exonerated by archeologists.  They excavated such a craft in the Nile Delta at Thonis-Heraclion.

Troop carriers perhaps?  Maybe not as they would have had to be towed upriver.  But going downriver that stone drogue being dragged behind would have made it a stable platform, slowed it down, and kept it in the main channel.  I've seen drift boats on the Wynoochee and Cowlitz rivers do something similar dragging a heavy chain on the bottom when fishing for salmon or steelhead.  Illegal as hell, and subject to heavy fine, but it's done anyway.

And the 'gold-mining-ants'  turned out to be somewhat true also - just a bad translation of the old Persian word for "marmot" with that for "mountain ant".  According to French ethnologist Michel Peissel anyway.  He says that local people in northern Pakistan have collected gold dust for many generations that had been inadvertently brought to the surface by marmots when digging their burrows.

So I am confident that in the future there will be verification of some of Herodotus' other not-so-tall tales.  Maybe some budding archeologists can find traces of Phoenician sailors circumnavigating Africa two millennia prior to the Portuguese? 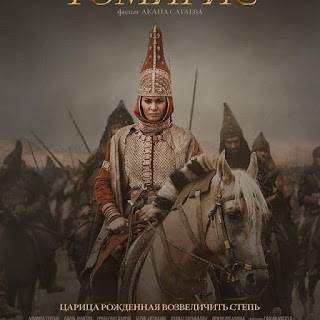 Or of Massegetae Queen Tomyris beheading Cyrus the the Great of Persia?   That may be a tough one as Cyrus' tomb was raided for grave goods and has lain empty of his bones for probably hundreds of years.   Plus Iran's Supreme Leader and his ayatollahs certainly won't allow any historical investigations about some female warrior besting  the man who has played such " a crucial role in defining the national identity of modern Iran."   Regardless, I'm waiting for the movie about Tomyris, starring the lovely and exotic Kazakhstanka Almira Tursyn.  To be released soon by KazakhFilm.

Update:   Xenophon claims Cyrus died peacefully in his sleep.   But he had no first hand knowledge, only what Cyrus the Younger told him.  But Cyrus the Younger was five or six generations removed and had an interest in vindicating the family name.  Sounds like a biased source to me.   I'll stick with Herodotus and the Kazakhs.