Eight years ago we had quite a conversation around this joint (as well as some amusement, if such a thing can be had about people killing and dying...) about the goin's on in the North African desert.

What surprised me at the time was that a handful of the barstaff here - principally our long-gone and lamented seydlitz - were in favor of the military intervention (he makes the case in the comments here, and laid out his case in more expansive terms here) and had hopes that giving Gadaffi his conge' would mean better times for Libya and, by inference, for the southern Mediterranean rim.

Well...that didn't work out very well. Libya has, since 2011, devolved into a semi- (or completely, depending on your definition) failed state. So far as I can tell there is a "government" in the old capital of Tripoli, but this "government" is, in most parts of the country, purely notional and those parts are in the best post-colonial, post-dictatorial tradition swarming with outlaws, rebels, armed insurgents, rustlers, cut throats, murderers, bounty hunters, desperados, mugs, pugs, thugs, nitwits, halfwits, dimwits, vipers, snipers, con men, Indian agents, Mexican bandits, muggers, buggerers, bushwhackers, hornswogglers, horse thieves, bull dykes, train robbers, bank robbers, ass-kickers, shit-kickers and Methodists.

Among these goofs is one of those ridiculously-comic-self-parodying-but-still-murderous caudillos of the Moon Over Parador variety who calls himself Field Marshal Khalifa Belqasim Haftar (or Hifter). This joker was tapped by the "government" to run the shambolic Libyan Army back in 2014 and has, as you'd expect from someone who dresses up like this - 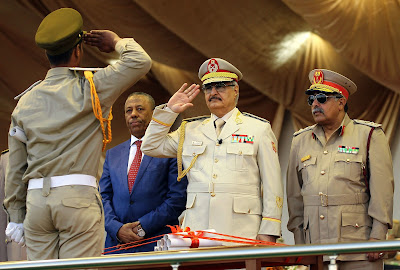 - declared himself Grand High Mufti Emperor For Life (or something) and has been prosecuting the civil war against the "government".

Having been involved in this rotating clusterfuck eight years ago and seen the worthlessness of the expense of cash and high explosive you'd think that the United States would have the good sense to stay out of this goat rodeo and, almost surprisingly, that was the case until last Friday. The official position was the Libya's problems are Libya's, which seems to me to be a perfectly reasonable position for the US to take.

But I had not reckoned with the Very Stable Genius in the Oval Office, who Friday blarted out his love and support for this Haftar jamoke: "The President recognized Field Marshal Hifter’s significant role in fighting terrorism and securing Libya’s oil resources, and the two discussed a shared vision for Libya’s transition to a stable, democratic political system.”

The "democratic system" nonsense is utter crap, of course. This goon wants to be Field-Marshal-President-for-Life, and that's the most Trumpy thing about him; Orange Foolius luuuurves him some dictators, and this dude is just the latest in the long string of jackbooted lovers the tangerine-hued shitgibbon has taken.

The only good news? It doesn't appear that the US will waste any actual blood and treasure on backing the Alfonse Simms of Tobruk. 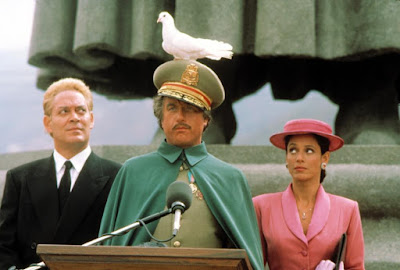 But, still...how the hell do you run a country with a doofus like this at the wheel?