After the ridiculous tragicomedy of the failed "coup" (if that is, indeed, what it was) in Venezuela the usual wild rumors are flying about whether Caesar Orangius will use U.S. armed force to do what the Venezuelan "opposition" couldn't, and before you could say "Achmed Chalabi" the usual suspects were blabbering on about regime change:

"Your time is up. This is your last chance. Accept Interim President Guaido’s amnesty, protect the Constitution, and remove Maduro, and we will take you off our sanctions list. Stay with Maduro, and go down with the ship." (Bolton on Twitter)

I'm not sure whether to laugh or cry, frankly.

I think the fears of a Venezuelan intifada are overblown. I don't see this as another Iraq Occupation with GIs getting blown up on roads and mortars hitting the Green Zone in Caracas.

What I do see is that regardless of who rules in Venezuela the nation is completely fucked, and only a great fool (or John Bolton and Mike Pompeo and Donald Trump, but I repeat myself...) would want to have anything to do with it.

How quickly we forget that the very reason there is a Maduro - and before him, a Chavez - is because the rule of the people like Guaidó and López was worse for Jose and Maria Desayuno than Chavez and Maduro were, at least initially. The rabiblancos or whatever they're called in Venezuela ruled for the 1% in Caracas, and the notion that the mass of Venezuelans want them back in 2019 is as idiotic as believing that installing the Iraqi National Congress would make them the Federalist Party of Iraq back in 2003.

Add to that the simple fact the Venezuela was and is a massively corrupt petrostate at a time when petroleum prices have cratered. Yes, the Trumpkins are doing their best to bollix the petroleum market by screwing with Iran, but it's unlikely that they can jack prices up enough to save Venezuela from itself. The place is simply screwed in the short- and, probably, the medium-term, no matter who runs it.

But it's hard to underestimate the Great Wall of Stupid that runs through the Fraudulency Administration:

"The president has occasionally mused to others that Bolton wants to get him into wars. Two advisers who have discussed Venezuela with him said Trump often brings up Florida politics, and his golf club in Doral, when talking about the subject. Both said Trump was unlikely to authorize any sort of long-term military action there. At the same time, however, aides said he has given Bolton wide purview over Venezuela."

I like the golf club thing; that's particularly Trumpy.

(I wonder if he knows there's a par-3 one-hole "golf club" along the Korean DMZ?)

With any luck my Army brothers will be spared a dip in this shitpool, because right now only the locals get to enjoy the dysfunctional mess that is Venezuela...but remember the "Pottery Barn Rule"?

Jesus wept. The stupid, it burns. 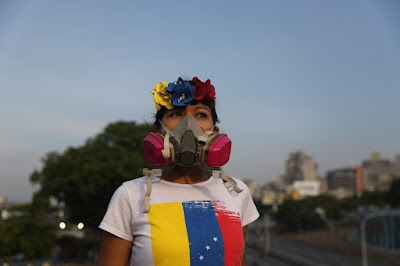