Soldiering in the Dead Time

One of the odd things that I remember about the Army of the late Eighties was something called the "half-day schedule".

You see, the week between Christmas and the New Year was a dead time for the peacetime Army of that era. Other than the guys posted to places overseas that might genuinely expect some sort of trouble the CONUS outfits typically scheduled nothing for that week. My two units at Fort Bragg and the third at Ft. Kobbe in Panama went to a training schedule that stopped at midday.

So everybody got out for PT in the morning, did some sort of minor housekeeping chores (this was a very popular time for knocking out the bullshit classes required by DoD or DA - accident prevention training, driver training, PMCS...whatever, if it could be done in four hours it was done), and then knocked off in the afternoon. The single guys played football or watched television or just hung out in the barracks, the married guys went home to the Issue Spouse and kiddos.

In a lot of outfits the single guys took all the holiday duties so the married guys could spend time with their families. Here I am at two in the morning pulling HHC CQ during that week. You can tell how thrilled I was to be there and be awake at that moment. 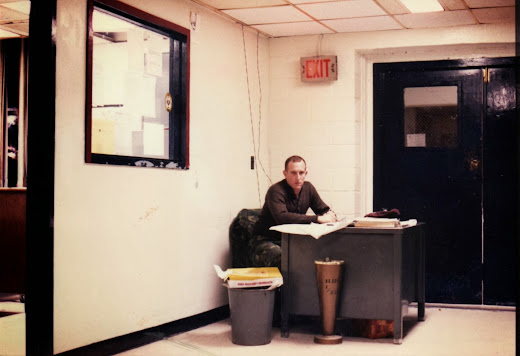 I suspect, like many of the "traditions" of that time the old half-days of Dead Time are long gone. We're a "warrior" Army now and I suspect that warriors are not encouraged to laze about the barracks watching "He-Man" cartoons.

But I'll bet that this week still has that strange, drifting, almost-vacant feeling that we shared during dead time. The sense that the old year had passed away but the new one had not begun; a hollow time, a sort of military Zappadan during which the guys (and girls) have waaaayyyy too much time to think about things done and undone and regret them both. 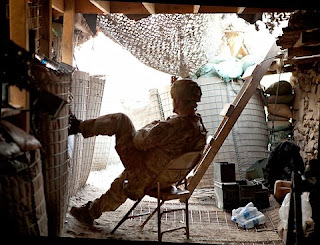 What made me think of this was coming across the news from Afghanistan and realizing with a nasty start how We the People have allowed our news sources to consign the guys and gals there to Dead Time.

While those of us Stateside civilians enjoy the seasonal largesse of material goods and family coziness they are still soldering on, and sometimes dying, as hidden from our sight as though they were in another world altogether.

Which ones of us know, or care, about the families and beloveds of MAJ Brent Taylor, who won't be calling his home in Salt Lake City this holiday? That received the most awful Christmas present imaginable? Would we care if we knew? Care enough to rouse ourselves from holiday torpor to so much as give their grieving so much as a thought?

How have we come to this, where we are sending young men and women to serve in the hard lands, and, when called upon, to die in our names and without so much as a whisper in our ears to remind us that they have been killed with fire and steel, gladiators for our indifferent spectation?

Last year I posted one of my favorite Heine poems that reminded me of the lonely feel of soldiering during this un-time.

Now much as I love poetry I'm nothing of a poet (if you want to suffer I will dig up some of my old efforts, but, no; some things should be whispered only down a well at midnight) but I think that this poem really needs a translator who once humped a rucksack. So here it is again; my own take on Heine's vision of the Lament of the Tower Guard. The original text is at the link above. It's well worth the read for the poet's words in the original German.

If my work - and Heine's - please you, I hope you will also take a moment to ask yourself; what is being done in your name, and by whom, in this dead time far away from your sight, and do you care enough to stand up and ask; why?

Forgotten outpost in the Liberation War
I've served here faithfully these thirty years.
I fought without hope that we would win,
knowing inside that I wouldn't get home safe.

I watched both day and night; I could not sleep
like my buddies did in the hootch nearby;
(though the loud snoring of these heroes
made sure I couldn't nod off even had I wanted to).

In the night weariness would grab me,
or fear - for only idiots have no fear -
and I would sing songs and rouse myself
and them, taking my revenge.

So...there I was, my weapon in my hands
when some sneaking bastard showed his head,
and I shot him good and proper and gave his brain
a juicy dose of hot lead.

But war and justice have far different laws,
and worthless acts are often done right well;
The fuckers' shots were better than their cause,
And I was hit and fell bleeding.

The LP is overrun! With my wound draining out
I go down hard and my bros all grab a hat -
So I died, unconquered, my rifle still ready;
Only my heart was broken. 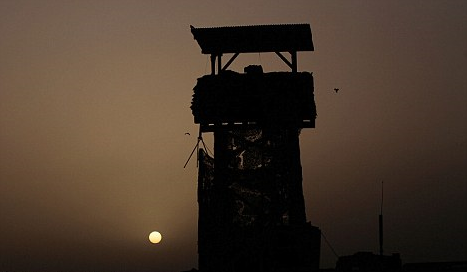