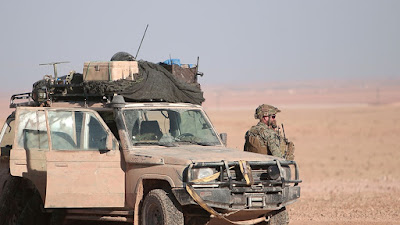 Al Jazeera reports that the U.S. ground forces in Syria are going to be gone within 60 to 100 days. Apparently this is because the chances that the Islamic State Navy will appear off New York Harbor to land jihadi marines have become very, very slim:

"Trump tweeted, "We have defeated ISIS in Syria, my only reason for being there during the Trump Presidency."

The "winners" here are clearly the GIs, who get the hell out of a civil war they should never have been inserted into.

Other "winners" include Erdogan's Turkey, which is now free to mop up the Kurdish areas of northern Syria that have been giving the Turks the collywobbles worrying about a Kurdistan in eastern Turkey, Putin's Russia, which now has a free hand to help the third "winner", the Assad government, without worrying about the pesky possibility of a shooting war with the U.S.

The bottom line is that anything that gets my country out of boneheaded land wars in Asia is a good thing, so, frankly, if "Donald the Dove" wants to declare victory and grab a hat from Syria, I'm pretty much okay with that.

The Kurds, of course. Who, having apparently failed to learn the lessons of 1991, threw their hand in with the Yanquis only to find that spoken promises aren't worth the paper they're not written on. Once again a foreign ally learns the hard lesson that Uncle Sammy is no more trustworthy than any other guy one's he's gotten what he wants off of you.

"There's so many times I've let you down
So many times I've played around
I tell you now, they don't mean a thing
Ev'ry place I go, I'll think of you
Ev'ry song I sing, I'll sing for you
When I come back, I'll bring your wedding ring.

So kiss me and smile for me
Tell me that you'll wait for me
Hold me like you'll never let me go
'Cause I'm leavin' on a jet plane
Don't know when I'll be back again..."

Update 12/19 p.m.: While as a sergeant I'm still fine with just declaring victory and getting the hell out of Syria, at least one individual who was deeply involved in the mission is less thrilled:

"We have not, no matter what the President has said, defeated ISIS. While it is true that ISIS has lost its physical holdings – the self declared caliphate – this actually makes them more dangerous, not less...as counterintuitive as it may seem, it actually increases ISIS’s lethality within and without the Levant in the short term. This is not something that US policymakers, as well as the senior military and civilian leaders tasked with reducing ISIS were unaware of. As is always the case when pursuing strategic objectives, achieving one creates new problems that require new, or at least adjusted, strategies to resolve."

I still tend to think that this is an overall positive for the U.S., but I'm willing to be persuaded otherwise. 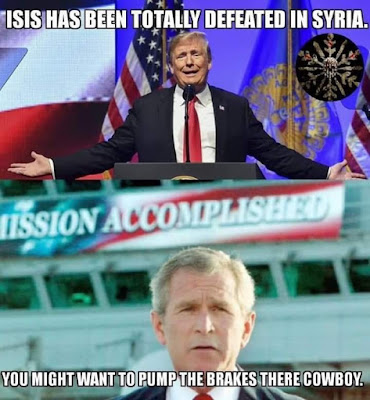 "Graham previewed his arguments to Trump for reconsidering the Syria pullout.

"I'm going to ask him to sit down with his generals and reconsider how to do this. Slow this down. Make sure that we get it right. Make sure ISIS never comes back. Don't turn Syria over to the Iranians. That's a nightmare for Israel," Graham said.

“And, at the end of the day, if we leave the Kurds and abandon them and they get slaughtered, who’s going to help you in the future?” he said. “I want to fight the war in the enemy’s backyard, not ours. That’s why we need a forward-deployed force in Iraq and Syria and Afghanistan for a while to come.”

This is why if you have Trump in the office pool it's always smart to bet the under. The sonofabitch is never going to make a deal and stick to it; it's always about whoever talked to him last.

Update 1/7/19: What I said about "Trump and whoever talked to him last"? Well, I'm guessing that it was either Bolton or Bibi, because now the money seems to be on the GIs staying in Syria for...well, who the hell knows? If it's until the IS is destroyed, Iran is defenestrated, and The Turks give up on smashing the Syrian Kurds? Shit, the sun will go nova before the guys in Syria DEROS.

The story is that Casey Stengal was surveying the field where the 1962 Mets were "practicing" and was heard to mutter "Can't anybody here play this game?"

Case, you had NO idea; these jokers make your boys look like the freaking 2917 New York Yankees...
Posted by FDChief at 4:04 PM