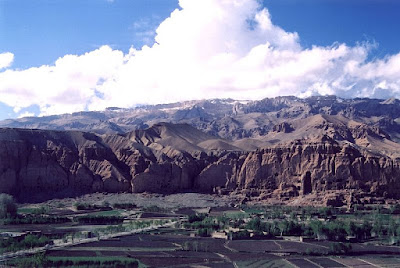 It once was famous.  It had been a center of Buddhist learning.  There are over 3000 caves in which lived thousands of Buddhist monks and mendicants.  There are oil paintings in those caves, perhaps the oldest in the world, that predate oil painting in Europe by 600 years.  It was also a way-station for the Gautama’s missionaries on their way north to China to proselytize and spread the seeds of the Middle Path.   And it was a rest stop, a mountain oasis, for southbound merchants on the old Silk Road.

An early American traveler described it as no longer bustling, a serene and comfortable place.  The valley, he said, is rich in grains, clover and beans.  Poplar and mulberry trees predominate.  Another traveler, US Supreme Court Justice William O Douglas, visited there in 1951.  He described it like a Shangri-La in his book ‘Beyond the High Himalayas’.  Infamous now of course because of the Taliban dynamiting the statues of Buddha, and Buddha’s wife and child in 2001.  Even though those monuments had survived the previous 12 centuries under Muslim rulers.

Bamyan is in the news again for religious reasons.  But this time it is a different religion.  It has become a Sanctuary City for thousands of Hazara, who are predominantly Shia and not accepted as fellow Muslims by the Talibs.  They are considered apostates and are a despised ethnic group by the Pashtuns.  They have just last week fled their villages seeking safe asylum from Taliban attacks.   The Afghan National Security Forces are not able to stop these attacks.  And neither apparently can the 10- to 14000 American troops who are training and advising Afghan forces or engaging in counter-terrorism missions.  Nor can the 6000 NATO soldiers and the 26,000 military contractors that are there.  In my humble opinion there is no possible unconditional victory over the Taliban in this ‘Forever War’.  Not without the complete and continuing cooperation of Pakistan and other neighboring countries.  Which is not going to happen anytime soon, at least in Pakistan where there are powerful elements allied to the Taliban.

I sympathize with those Hazara victims who will end up forcibly converted, or worse.  And I commiserate with those Afghani women who will again be incarcerated in the burqa and will again be denied education.  And certainly there will be revenge killings in Kabul, Kandahar, Herat, or Mazar-i-Sharif if the Talibs take over.   But what is our role?   Why does the US and NATO have to be the policeman here?  It is not in our precinct.

My solution?  I have none.  You cannot save the country.  Keep on negotiating with the Talibs?  I don't think so, they know we are leaving and will outwait us?   We have been there for 17 years.  But the Afghan Civil War has been going on for 40 years straight since the start of the Saur Revolution in 1978.

Perhaps allow the country to informally partition itself?  Give support and weapons to the Northern Alliance?   China has interests in the north.  They have signed contracts for developing oilfields near the Amu Darya.   And the Chinese also have a three billion investment in Afghani copper mines.  Sounds to me like this brouha is in their precinct.  Or we could stay out of the way of Iran if they send in troops to support their co-religionists in Bamyan and other parts of the Hazarajat – and also in the Persian speaking districts of Farah and Herat Provinces?   Not only stay out of their way, but perhaps actively encourage them by ending Trump’s attempted barricade of the Iranian economy?  Why not?  They provide weapons and support to Shia militias in Iraq, Syria, Lebanon and the Yemen; and in some cases they provide IRGC Special Forces.  General Soleimani and his Qods Force should be next door in Bamian instead of on the shores of the Mediterranean and the Red Sea.

Photo by Alessandro Balsamo
Posted by mike at 11:11 PM