Let me start with this; regardless of the why, the simple fact that the current Chief Executive did a meet-and-greet with his subordinates in Iraq is just fine. It's goes with the job of "commander-in-chief", especially given the standards we've set for our imperial wars. You get the job, you do the work, and that includes some facetime with the people you order into harm's way. If the current idiot had to be shamed into doing it? Well, he's been shamed on a whole bunch of things, like sucking up to Nazis and not, y'know, being a racist, and those haven't worked.

So if he got shamed into going to an airbase in Iraq he's done part of what's the bare minimum for a respectable annual review. So, fine.

Of course, being who he is, he's already getting slammed. The biggest howl appears to be about OPSEC violations, specifically, releasing pictures of Himself with a USN special operations outfit which was on a classified deployment. 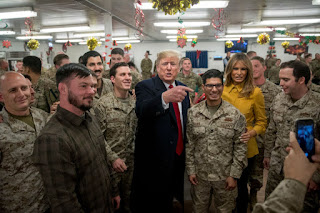 IMO, this is the one thing about this junket that can't be laid on the guy. I agree that this was careless (especially for a politician that made a big fat hairy deal about how Obummer was giving the "enemy" all sorts of information about who was going to deploy when and where) but despite his title the POTUS is not an actual serviceman. He's not required to understand OPSEC, neither is he responsible for it personally nor in his entourage.

Nope, the people who should be getting fried for this are the unit and installation commanders. THEY should have known that this was a photo-op and kept the guys whose presence there was supposed to be a deep, dark, secret far away from someone known for using every opportunity to fluff himself and his rep as a bad-ass deal-making shrewdie. Special operations people and Trump? They should have known he was no more likely to have resisted the impulse to show himself hanging with the tough guys than a dog can resist licking his butt.

And the MAGA hats and the Trump banners, turning this into a Trump campaign rally? That's on the commanders, too. They know the rules about using GIs as political props, or letting GIs in uniform, in a military workplace, act as political partisans. The fact that they let this stuff go is entirely on them, and entirely unacceptable. If I were their theater commander I'd be on them like the wrath of God. 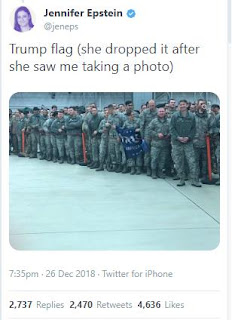 Still...this IS Trump, who seems to have a kind of reverse-Midas political touch, so he did manage to turn what should have been a nice little press-the-flesh-with-Our-Troops into a goddamn goat rodeo. Specifically;

1. Somehow he and his entourage (I can't bring myself to call it a "staff", since that implies some sort of planning and organization) couldn't be arsed to check in with, y'know, the "host nation" government about what the Iraqis expected and wanted.

Turns out they expected a visiting head of state to treat the host nation head of state as, well, a head of state. Meaning a face-to-face with the Iraqi PM and all the bog-standard political niceties. Of course Trump, who could give a rat's ass about shithole countries, cut it to a phone call and blew off the locals. This pissed off the Iraqi pols who, while IMO being as much of a fairly-worthless bunch as most Arab pols, are understandably touchy about Americans treating Iraq like a conquered province. The result was an angry shout to vote the Yanquis out. Whether or not that will happen, it was ridiculously needless and a boneheaded oxygen-thief-level fuckup by the POTUS and his groupies.

Trump and his GOP pals love to complain about Iran and the supposed Iranian meddling in the Middle East. But doing dumb shit - unnecessarily dumb shit - like this is how Iran makes bank off of these dodos and gets results from their meddling. Obama's supposed foreign policy mantra was "Don't do stupid shit"; Trump's appears to be "Stupid shit? What's that? Let's do some!"

2. And - although this isn't surprising, given the source - the little speech he then blarted out to the assembled joes and mollies was ridiculously inappropriate. Instead of the "Thanks boys and girls you're the awesomest, hooah!" he gave a full-on campaign speech full of political poison about Democratic immigration treason and larded with ridiculous lies. My least-favorite was his whopper about how he, he, the Grinch, carved the 10% pay-raise-roast-beast. Seriously? What, you're now Caesar in an orange skinsuit, giving donatives to your loyal legionaries? I mean, I know the guy pretty much sees the Constitution as an asswipe, but that's ridiculous. Here's the exact quote:

Aside from being, well, an utter lie, Tangerinius Caesar here couldn't "get them a big one"; he doesn't have the "power of the purse". I wouldn't expect GIs to know that - I did, but I'd taken "US Government" and con law in college - so it's utterly vile for him to try and buy loyalty with that lie.

Of course, there was more of the Trumpkin usual, for example, military policy as protection racket:

"If they want us to do the fighting, they also have to pay a price and sometimes that’s also a monetary price so we’re not the suckers of the world. We’re no longer the suckers, folks. And people aren’t looking at us as suckers"

No, dummy. They're looking at you.

They're looking at us as the poor dumb bastards ruled by the sucker.
Posted by FDChief at 12:33 PM