"A Republic, if you can keep it"

A tax measure that provides a road map to increased inequality in one of the already-most-unequal industrial democracies and shreds the social safety net woven in the depth of the Depression to prevent a hard turn to fascist or communist revolution, and that is "supported" by, at most, a quarter of the citizens of the affected polity (and that in the midst of a relentless, unashamedly vicious barrage of lies from the ruling party that suggests that at least a portion of that 25% would fall away if they understood how nakedly plutocratic this legislation is) is as close to the definition of "taxation without representation" as I can think of short of a genuine occupation government.

If our political system has devolved to the point where a coterie of neo-Gilded Age fantasists can impose their Sharia Law on three-quarters of the populace, then we have put a wrap on the American Experiment.

In a truly republican nation this would decorate Pennsylvania Avenue with a festive holiday display of heads on pikes.

It has not and will not. 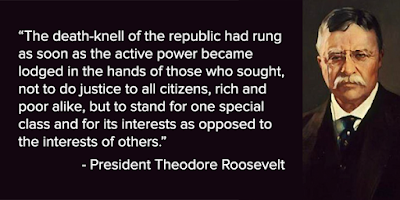 And, as such, we have no one to blame for our failure to keep our own republic but ourselves.

Update 12/6: And a reminder that, as vilely oligarchic as the GOP has become domestically, it, and it's current Chief Executive, are aggressively moronic internationally, as well.

I suspect that the derp behind this reflects the degree to which 1) the Fraudulency Administration is chock-full of people whose understanding of geopolitics ends with the Little Golden Book version of the New American Century, and 2) Trump "foreign policy" is really not about foreign policy but providing red meat for the base. The Right has been jonesing for going all-in on Israel for some time now, but previous administrations (largely with functioning hindbrains, even if as evil as that living inside the carapace of Darth Cheney) punted on the Jerusalem move for the very reasons pointed out in the linked article; it provides no real geopolitical advantage for U.S. interests in return for one more brick in the wall of Arab ire.

I know that several here have taken me to task for being "angry" about all this.

But, frankly, what else is there? I live in Blue Oregon. Outside of helping defenstrate the reptile Walden there is no more I can do to make Oregon a force for the 20th Century in D.C. And yet, here I am, like Smokey the Bear watching these vandals burn the forest of the America I grew up in down around me in hopes that a tangle of Gilded Age weeds will grow in its place. And that briar patch will be what my kids have to grow up in, an America more like the sort of America that drove men into the streets of Homestead to be shot down by formed troops.

I don't want that, and I don't understand how anyone not in the American aristocracy would.