Another Invisible Campaign in the Phony "War on Terror"... 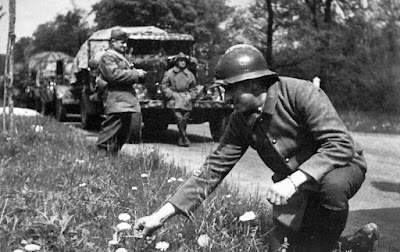 Jim at RAW likes to hit on the "fake news" aspect of the so-called War on Terror that has obsessed and dominated the public face of U.S. foreign and military policy since 2001. As such it's worth noting that this past week, while the U.S. government was busy making things worse in the Middle East a combination of Iraqi, Syrian, and Iranian Shiite troopers and SovietRussian and U.S. flyboys and advisors put paid to the last remnants of the Islamic State as an actual physical polity.

This news was met with massive indifference by the Trump Administration, presumably because the success had nothing to do with His Fraudulency's vaunted "plan" to defeat the daeshi maneuver forces and if it doesn't magnify the Orange Leader it doesn't count.

But, also, this immense silence from the very people who typically clatter on so loudly about the "threat" of "radical Islamic terrorism" points out the extent to which that clatter is purely for domestic consumption. News that reassures the Common Herd that these wannabe Saladins really are nothing but a gang of raggedy-ass fellahin less likely to be a hazard to life and property than bathroom falls and defective Christmas lights isn't useful for keeping the public fearful and submissive to the sort of misgovernment that Sun Tzu warned was the danger of prolonged wars.

In the last post Mike asked "why are we still there?" in Iraq, Afghanistan, and the other Middle Eastern boobytraps. This, to me, is a perfect example for the way it points up the why; We the People have no real metric to assess the pointlessness of these misadventures, largely because there is a substantial portion of our own "leadership" that profits from that ignorance and the resulting fear.

Will the destruction of the physical Islamic State destroy the "Islamic State" as a generator of a predictable amount of death and destruction? No. Will it solve the deep social, political, and economic problems of places like Iraq and Syria that help produce the sort of destructive energies that produced the Islamic State in the first place? No.

Is, and has, the united States actually done anything constructive to address these problems? No. Indeed; the primary effect of U.S. military and foreign policy in the region has been everything bin Laden hoped for in 2001. The entire region is now less stable, more volatile, and more bitterly divided than ever before.

Except that the "Islamic State" is no longer an actual "state".
Posted by FDChief at 9:43 AM