This is NOT normal 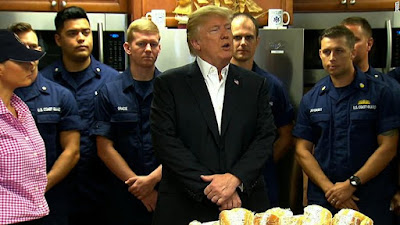 Here's an excerpt from the Thanksgiving oration that the 45th President of the United States gave to a group of servicepeople:

"But, I mean, we have equipment that -- nobody has the equipment that we have. And it's sad when we're selling our equipment to other countries but we're not buying it ourselves, okay? But now that's all changed. And the stuff I said -- the stuff that we have is always a little bit better too. You know, when we sell to other countries, even if they're allies -- you never know about an ally. An ally can turn. You understand. You're going to find that out. But I always say, make ours a little bit better. You know, give it that extra speed. A little bit -- keep a little bit -- keep about 10 percent in the bag, because what we have -- nobody has like what we have, and that's what we're doing."

1. We were selling our "equipment" to other countries but not buying it ourselves...but now we are.

2. Our "allies" are treacherous bastards that will turn on us - "you're going to find that out".

3. So we ensure that whatever of this "stuff" we sell to our "allies" is 10 percent worse - slower, weaker, less accurate, something that's not "in the bag" - than what we kit ourselves out with because, well, treacherous bastards.

I know that we tend to lose track of the moron signal amid the blabbering noise from this joker, but...c'mon. Seriously?

Scene: Office of the Ministry of National Defense, Seoul, Republic of Korea, afternoon. A tall, severe looking man enters and crosses to his desk, staring intently at his phone. He presses a button on the intercom panel.

The Minister of Defense leans back against his desk, staring at his phone with an irked expression. Several moments later the main door opens and a shorter, plumper man enters. The Minister looks up at him and holds out his phone.

Song: "Did you see what that fucking Yankee idiot said last week?"
Lee: "Which fuc..oh, Trump? I dunno. What particularly idiotic thing was it this time?"
Song: "The...he...oh, hell, just look at this."
He passes the phone over to his subordinate, who scrolls down quickly.
Lee: "Oh, c'mon, boss. That's just Trump. His mouth moves while his brain is in neutral. You know that. Don't mean nothing."
Song: "Nothing? Really?"
Lee: "Sure. You know Americans, they just talk and talk with their head up their ass, and this Trump, well, you met him. He's like the lights are on but nobody's home. He can't possibly mean that guff. If it was true he'd be killing every arms deal Lockheed and General Dynamics and Raytheon will ever make. Not even that spray-tan dope could be that fucking stupid."

There's a long pause. Both men look at each other with growing horror.

Lee: "No problem, chief. I'll call our people in California right away. One of my guys is bonking one of the QA/QC people at BAE Systems; he'll have an answer for us by morning. Oh, and I'll get the PVO to give me a quote for S-400s, and see if the Israelis are still interested in selling Arrow-3s. I've got some people in Johannesburg, too, I'll see what they're willing to move."
The Vice-Minister is already pulling out his phone as he heads for the door. Minister Song slumps back against his desk as the door closes behind his subordinate and punches the intercom button angrily.
Song: "Where did my wife tell you to hide the soju, Sang-mi?"
Sang-mi: "Minister...I..."
Song: "I'm in no mood for fucking around, Sang-mi. Dig up that bottle or I swear, Imma walk down to the bodega down the street and pay cash for the cheapest, nastiest booze I can find and you can explain that to my wife."
Sang-mi: "I've got it right here, Minister."
Song: "Good. Straight up, and call the Air Force Chief of Staff and tell him I want to talk to his zoomie ass most quick smart. Thanks."
He sighs, and stares out the window as he waits for his drink.
Posted by FDChief at 4:02 PM