The Pot Calling the Kettle Black 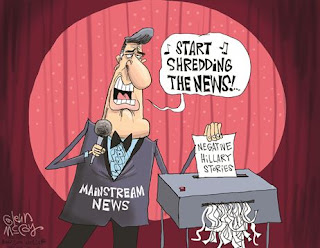 Some boys kiss me
Some boys hug me
I think they're o.k.
If they don't give me proper credit
I just walk away
--Material World, Madonna

[I hear it's Ladies Night at the Pub, so I've come to bring a lady's perspective.]

With CBS's appeal to Anita Hill, we have now entered the bizarre ruralia of the outer limits of reason. (Who am I kidding? Our once-esteemed press has been inhabiting that non-zone throughout this election cycle.)

Professor Anita Hill -- that lovely, intelligent, well-spoken witness against the unfitness of now-Supreme Court Justice Clarence Thomas in his confirmation hearings, who was thrown under the bus and thoroughly discredited by the fickle kingmakers, the press -- was wheeled out by ABC news yesterday to give a brief and grim commentary on sexual harassment 25 years after her shameful treatment.

Doubly soiled both by her then-boss -- Mr. Thomas (a.k.a., "Long Dong Thomas") -- and the press and judiciary committee's assault upon her unimpeachable character, that same press attempted to exploit her once again in their agenda to despoil the candidacy of their doyenne Mrs. Clinton's Republican opponent.

But we needed a token black jurist to replace retiring Justice Thurgood Marshall then, and Mr. Thomas was as token as it gets. (Earlier this year the middling jurist broke his monastic record of a ten-year silence when he spoke on a minor domestic violence case.)

A Supreme Court justice is arguably as powerful as the United States President for he interprets the application of the laws of the land. Mr. Thomas, who impressed upon the demurring Ms. Hill "about ... such matters as women having sex with animals and films showing group sex or rape scenes" and of his own "sexual prowess" -- all while married -- (according to Ms. Hill's 1991 testimony before the Senate nominating committee), now has the liberty -- the audacity -- to speak out on a case of domestic violence.

This is a violence in itself.

Fort her part, the exemplary Ms. Hill could not be coerced by ABC to shill for Mrs. Clinton. She simply said that it is nice to see yet another opportunity to discuss sexual harassment. However, her distinct lack of enthusiasm made it clear naught will change. She would not partake in the press's insistence that Mrs. Clinton would be a change agent advocating for women's rights.

Mrs. Hill's experience with a now very powerful man did not occur in the Dark Ages. If the sexual harassment claims of a bright and articulate woman like Anita Hill can be dismissed, how much less the hopes for other women?

The New York Times came up with its own gotcha in its Wednesday piece, "Two Women Who Say Donald Trump Touched Them Inappropriately". "Touched them"? And the meme has now morphed into rape, thanks to the rigor-less effects of social media.

Not featured high in the story, one of the women, now 74-year-old Jessica Leeds (allegedly groped by a young Mr. Trump in first-class) said that such behavior from men was "routine throughout her time in business" in the 70's and 80's.

Of course, IRL, we are these hormonal rutting human animals often behaving badly. But the press would make you think that only some people are tawdry, and some are spotless. It is always black or white today, and it is always sex (same as it ever was).

And this teapot tempest suffices to slake our salacious demand for news-ish material that will help us determine the next leader of our nation.

Mr. Trump does not help his own case through his own braggadocio and blather. He has not learned to not say all of what you think. It is a double-edged sword, for this candor is his attraction, for many.

The media will happily comply with our demand for smut, and has been trawling for a year to uncover the "gotcha's, but they do seem rather lame. He is not an Arkansas boy (like Mr. Clinton), and he has the money to buy the best women he can afford.

We must display the proper shock and appalment to the boorish stories from the press. It hurts us to know that our sisters and mothers are truly not equals in the world, and we recognize our own bigotry in that knowledge.

The implicit deal the press has offered us is: vote for Hillary and we will make all of this go away. The painful deluge will stop, and misogyny will loose its grasp on the world.


Do you believe it will, on any substantive level?