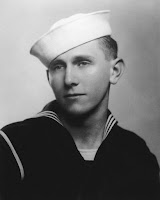 US Coast Guard Cutter 'Munro' just successfully completed a first round of acceptance trials.  She is named after Coast Guard Signalman 1st Class (SM1c) Douglas Munro, who was awarded a posthumous Medal of Honor for conspicuous gallantry in World War II.  Munro was serving as a coxswain in a Higgins Boat and was killed in action at Guadalcanal 74 years ago last month.  The US Navy took in a lot of Coast Guardsmen during WW2 as they had a wealth of experience piloting small boats in the surf.  Most Navy Sailors were used to blue water and usually the only experience they had as coxswains in small boats were in relatively quiet harbors when the big ship was at anchor.

Munro was lead coxswain in a group of ten Higgins Boats that rescued a 500 man element of First Battalion Seventh Marines (1/7) who were outnumbered and surrounded by 4000 plus Japanese at a beach west of the Matanikau River, Guadalcanal.  It was Rifle Companies only with no heavy machine guns and no mortars and out of range of artillery support.  Chesty Puller was the Battalion Commander of 1/7.  But he was east of the river commanding an ad hoc two battalion task force and separated from those that were surrounded.  With casualties to his comm section, Chesty stood up on the beach wig-wagging with signal flags to the USS Monssen (DD-436) for naval gunfire and directed that fire support himself acting as his own Forward Observer. 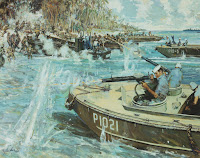 SM1c Munro volunteered to lead a small force of ten Higgins Boats into the beach.  He brought those boats in-shore under heavy enemy fire and got the evacuation started while covering with his machine guns on his boat.  After the majority of the Marines had got aboard, Munro saw that the Marine rear guard was having difficulty embarking due to continued intense fighting.  Sizing up the situation, Munro deployed his and other boats into position to cover the rear guard.  By doing that he exposed himself to even more intense enemy fire and was mortally wounded.  He was 22 years old.  His final words were: ”Did they get off?”.

Munro is buried in his hometown, Cle Elum, in the Cascade Mountains of Washington State.  Every September 27th many Coast Guardsmen and Marines and Cle Elum residents gather at Laurel Hill Memorial Park to honor him.   I served briefly with 1/7 myself many years later in Vietnam and should have gone to the memorial last month but was not able to make it.  I hope to be there next year for the 75th anniversary of his heroic rescue.  The new Cutter 'Munro' will initially be stationed out of Seattle when she has finished all her sea trials.
Posted by mike at 10:54 PM