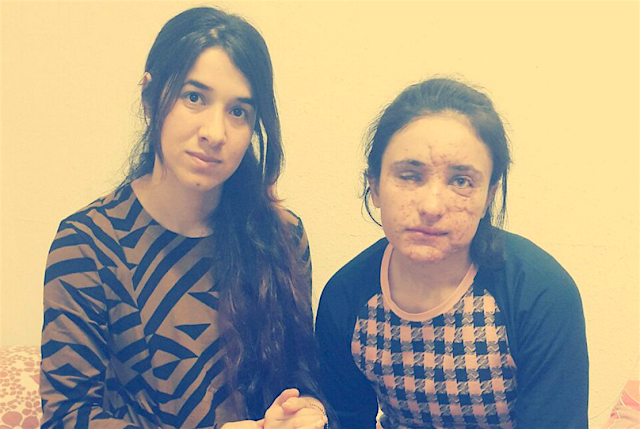 Nadia Murad and Lamiya Asi Bashar have been awarded the Sakharov prize by the European Parliament.  Nadia and Lamiya are Yazidis both from the same village of Kocho near Sinjar and who both escaped from ISIL slavery.  Lamiya was blinded by a mine explosion during her escape.  The two of them have been speaking out internationally against human slavery and ISIL cruelty and are unofficial spokespersons for the thousands of Yazidi women still in chains.  The wannabee Caliph al-Baghdadi has issued a fatwa against them and threatened them with re-enslavement or death.  In getting the Sakharov award they join the ranks of Nelson Mandela, Aung San Suu Kyi, and Malala Yousafzai.  Lofty company, but they deserve it IMHO.

I never understood the attempted genocide of the Yazidis.  The claim by Salafists was that they were devil worshippers.  Not true, and it boggles the mind to think that in the 21st century that anyone would resort to mass murder, mass kidnappings and rape whether true or not.   Although Yazidis are not <i>”people of the book”</i> mentioned by Mohammed, they are monothiests.  But then all of the world’s monotheistic religions have been murdering each other for millennia.  I am reverting to the beliefs of my grandmother – Jesus maybe, but also leaving tobacco or trinkets or moonshine at the base of trees, in creeks and rivers, and on graves of loved ones.  Color me pagan.

BTW, Yazidi women and even their mothers and grandmothers are fighting back: