Occupy Portland is over. 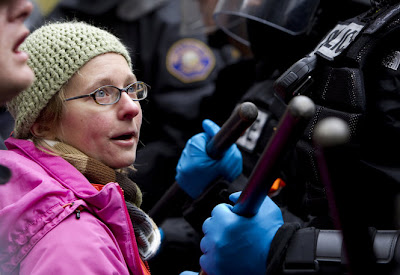 An ad-hoc force of police from several places including Portland Bureau today cleared the two downtown parks that Occupy had occupied. The protesters have regathered in several other downtown sites to "discuss" their next move, but in my opinion this is the end for Occupy.

For more than a week the local pols, newspapers, and television outlets have been voicing increasing impatience with Occupy and, truthfully, it seems hard to imagine how the "protests" would have done anything more than they have which beyond generating a sort of unfocused unease amongst the chattering classes has been no more than an irritant under the silken drawers of the rich and powerful.

It's been more than forty years since the mild insurrections of the U.S. Civil Rights era, half a century since the "nonviolent" protests of the Indian National Congress forced Britain's release of her Indian colony, a full century since the end of the violent strikes and near-rebellions that empowered the American labor unions. 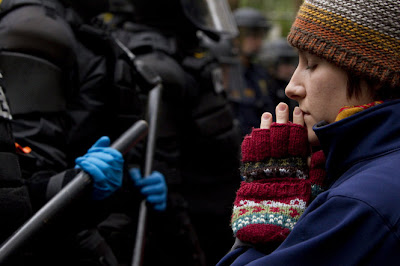 In the interim we have forgotten that "peaceful" protest is exactly as effective as "peacefully" resisting a savage beating unless you have your "peaceful" beating carefully planned to maximize your PR value - and it helps if your opponents are frigging morons, or politically and financially exhausted.

The civil rights marchers won because the Southern bigots were stupid enough to physically attack well-dressed men and women on national TV and newspapers. The Indian factions won partially because BG Dyer was a fucking bloodyminded idiot and partially because the Empire exhausted itself fighting two world wars. You could argue that the labor unions didn't actually win, but rather reached a sort of armed truce that lasted until the plutocrats shat the bed in 1929 and helped elect a labor-friendly administration.

Occupy had none of these to help it. Instead, it faced a massively corrupted and paid-for military-industrial-congressional-financial complex that is doing quite well under the present system. Any hopes of an FDR moment disappeared early in 2009 when it became obvious at least to me that the current Democratic administration had no interest in even trying cocking a snook at the banksters. The New New Deal this wasn't.

And the Occupiers forgot the other lesson of those earlier protest movements; that the public could give a shit about your politeness. The relative discipline of the Occupiers ended up looking like meekness, and regardless of what the Good Book says the meek won't inherit jack shit without a pair of brass balls, friendly press, and a sackful of bricks and cobblestones hidden away in case all the politeness doesn't work. And Occupy Portland had none of those things.

And ask the Paris Communards how even WITH those things, if the government is willing to ignore you when you're weak - and kill or arrest when you're strong - you will lose. 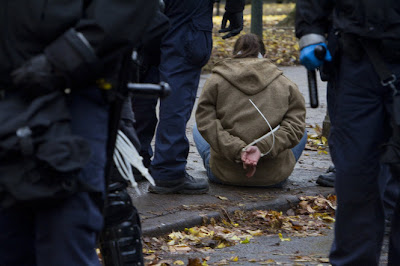 So the banksters have proved that a camel can leap laughingly through the eye of a needle. They have bought all the government they need, they or their lickspittle brownnosers own the media conglomerates, and the U.S. public is about evenly divided into thirds, and while one third is ignorant and indifferent one of the other two-thirds is actively hostile, either hoping to curry favor with the plutocracy or, tragically, mistaking the random helium in their guts for wings; by the time they fart away their good luck they will be plummeting too rapidly to have the time for regrets.

Occupy might have had more hope if the public was more intelligent and their enemies less powerful. In the first couple of days, or weeks...

But no matter. That hope is gone forever.

In March, 1935 the tiny German Army marched into the Rhineland, the first of Hitler's Thirties gambles. And it was more than a gamble; Hitler and his commanders knew how tiny their little force was. As hapless as the French Army of the Thirties was, and it was a fairly ginormous clusterfuck, a whiff of grapeshot in the old Napoleonic style would have seen the Heer packing across the Rhine and, probably, the end of the Hitler Era two years after it began.

But the French were too meek to make that move, and Hitler's success propelled him all the way to the wreck of the European world ten years later.

And here again, the first couple of days - "Die erste achtundvierzig Stunden" is how Hitler phrased it - were key. 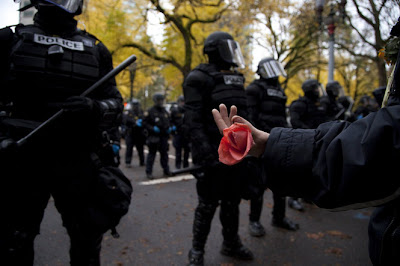 Once the larger public failed to rise in the first couple of days the Occupiers proved to have no strategy to force the issue or force their enemies to submit and their attempt to tame the bulls and bears is done.

Update 11/14: Upon further review, I had a couple of thoughts.

The antiwar protests of the Sixties have something a answer for in what they've done to the U.S. left. The protests were far less effective at "ending" the war than they seemed at the time (and have been mythologized since) - Nixon's concerns for the economy and the public's indifference to the Vietnamese were more crucial. But the result is that somehow the notion that merely marching around and sitting-in would be enough to effect political change and the record of those actions since then have proved this to be the nonsense it is.

The civil rights protestors, the INC activists, the labor movement radicals all had a collection of things that the post-'72 U.S. protests haven't:

1. An actual strategy that involved an entire range of acts, from pure theatre to violent protest, and some notion of how and where these would be applied. If OWS had anything other than "be there" I haven't seen it (mind you, the combination of vast public indifference and active media ignorance/hostility made it difficult to see how they could have done anything else effectively). And to orchestrate this these groups also had

2. An actual structured leadership - often fractious, even infighting, but the leaders were there actively planning the attacks on their opponents. The OWS seems to suffer from the goofy fuzzy-logic cloud-leadership that is to my mind the very WORST hangover of the Sixties protests. People like Lewis and Nehru and MLK were in many ways very unlikeable, manipulative, cunning sons-of-bitches. The OWS people seem to have absorbed the wrong lesson, which is that to get to a beneficent end you need to be a beneficent person. Couldn't be wronger. Many, perhaps most, of the people who have done "good" things for the mass of humanity have themselves been real bastards. You have to break a lot of eggs sometimes to make a good omlette...

Sorry that I'm such a little ray of sunshine today. But, as Matt Taibbi points out, the things that OWS is pointing fingers at aren't minor issues - they go to the very heart of the corruption of the crony-capitalist scam that has been driving the U.S. (and much of the Euro nations) back towards the Gilded Age. I'd have liked to see the U.S. and other western publics "get" that. But this doesn't seem to have happened, and at this point I have to conclude that it ISN'T going to happen. And for someone like me, who is and whose kids will be, part of the 99%, that looks like a bad thing for the future.
Posted by FDChief at 7:40 PM