Out of touch with Reality??

Read an interesting paper this morning.

The chart below summarizes one part of the study. The first bar is the actual US distribution of wealth in 2005, the second is what the respondents estimated the distribution to be, and the bottom bar is what they said would be "ideal". Note that in the "Actual" bar, the bottom 40% do not show up, as they hold only 0.3% of the nation's wealth. 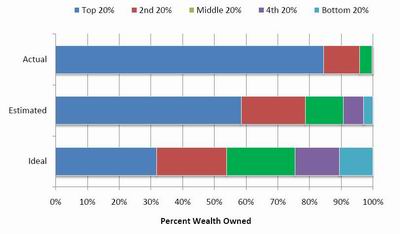 Even when you break it down by respondent demographics (income, voting choice or gender), people are in rough agreement! 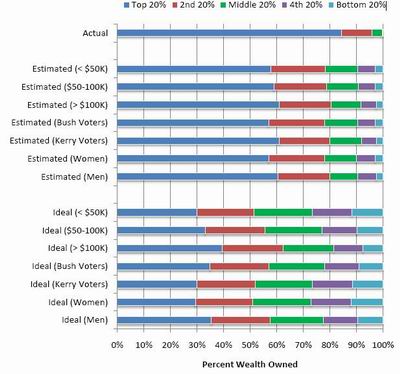 In many threads in the past, you guys have raised the notion of the people starting to revolt. Well, if the bottom 40% of the economic ladder have such a grossly understated view of their status, from whence comes the incentive to revolt? If the rest of the population also thinks things are much better than they are, from whom would the bottom draw support?

FDChief went to great lengths to discuss "lies, lies, lies". Sadly, the people are not in contact with the "Truth", even when not lied to. Even the "Truth" about themselves does not compute.

As long as the general population lives in "Fantasy Land", the rich will get richer, the poor will get poorer, big money will own our government and wars like Iraq, Afghanistan and the like will blithely go on, and on, and on.
Posted by Aviator47 at 12:58 AM