Did you know that the Federal Republic of Germany settled the last of its WW1 reparation debt last Sunday? 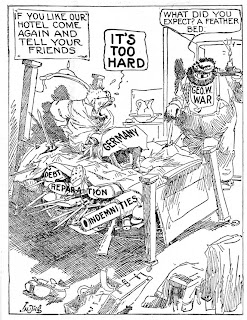 Completely aside from the utter oddity in the final payment of the Kaiser's punishment coming from the post-reunification, post-denazified, post-a-whole-'nother-world-war Germany, the thing that this strange little news item makes me think of is the almost unencompassable effects that dismal war has had on human history. When you think of what might have been had the European Great Powers not hurled themselves into war through a combination of hubris, stupidity, patriotism, ignorance, and animosity, of the impact the War had on people's lives, and in some ways is affecting them even now...well, perhaps the final payment may even have been a little precipitate.

In human history there have been many great hinges of Fate. But I honestly can't think of one greater or more terrible than the First World War. 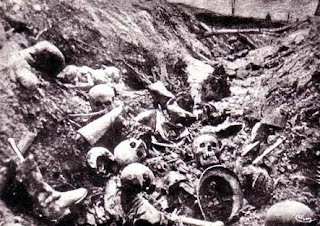 And as a soldier, I always think about the First World War whenever someone quotes to me Bobby Lee saying "It is well that war is so terrible - otherwise we would grow too fond of it." Now, I'm a military history buff and I understand the pre-industrial context and the tradition of Heroic war that Lee's statement embodies. But I can't imagine anyone but a fool or a madman saying that after the Somme, or Verdun, or Passchaendale, or Chemin des Dames. He was fifty years ahead of his time, but it was 1914 that finally killed off Lee's notions of war and replaced them with Bill Sherman's;

"You cannot qualify war in harsher terms than I will. War is cruelty, and you cannot refine it; and those who brought war into our country deserve all the curses and maledictions a people can pour out."
Posted by FDChief at 10:16 PM