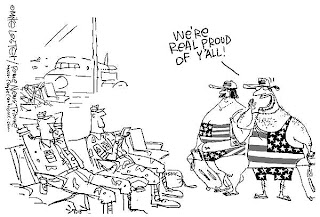 I got a cow that's gone dry a hen that won't lay
A big stack of bills that get bigger each day
The county's gonna haul my belongings away
Cause I'm busted
--Busted, Charlie Pride

Meanwhile, back at the ranch, Obama is yukking it up on The View, The Clintons are feting Chelsea and her new husband to the tune of almost $2 mil, and Mrs. Obama is enjoying a week in the Costa del Sol in Southern Spain with 40 close associates (Material Girl Michelle Obama). No doubt she needed a break after the Maine holiday.

Of course, wealthy people are entitled to enjoy their dough. However, it is all just a bit egregious coming as it did in such a somber month. Aren't leaders expected to show some restraint in a bid for solidarity with the governed? That means more than lip service to bite the bullet and hoe a row. Oh, and not flying to your fun in the sun on the taxpayer's dime (Michelle Obama flew on Air Force 2.)

It's a given that politics is the last outpost for America's regency, but men like Franklin Delano Roosevelt and the missus made every effort to not flaunt the Bono lifestyle. In fact, since they were not arrivistes, there was no chance of such jeopardy.

The Democratic party used to represent the interests of the working class. Even if they weren't all Trumans, they at least understood the concept of noblesse oblige. Today there are no such pretensions. It all seems pretty declasse, if you ask us.

These people do not lead nor do they produce anything of value. (The last Democratic president who did was peanut farmer Carter, himself a millionaire.) But they sure do sit in the catbird's seat and skim off the cream from those that actually do work and produce. Republicans are exactly the same, but they do not pretend to advocate for the Little Man.

While our New Brahmins throw their opulence in our face, another world hangs on by a thread. Here in Tallahassee it was reported this week that a patent was awarded to the inventors of the "Cradle of Hope" -- a collapsible, mobile cradle to be used for those without a permanent shelter.

These are the two Americas: One where catered, air-conditioned tents are set up for celebrities hob-nobbing with politicos at swanky events, and one where tents cover grave sites at Arlington burial events.
Posted by rangeragainstwar at 11:28 AM