Does this strike you as a little piece of PR for Private Benjamin's Army, you remember, the one with the "condos and the yachts"? Is it just another "You're gonna love this great new PT program because...it's new!" sort of thing that comes out of the schoolhouse every couple of years? 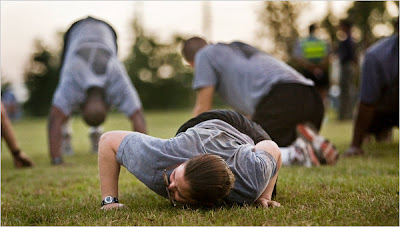 For those who don't want to go read the story, the gist is that the U.S. Army has cut back on some of the physical training elements, especially running, because (at least the official explanation is) the trainees are coming in all fat and nasty and can't run without hurting themselves.

Now. I was on the trail a decade ago, and I don't remember that we had all that many fatties and softies.

I remember complaining about the Joes' committment a lot - about the way they whined and tried to jake it - but not so much about their physical shape. Yes, some were soft, but, hey, we expected that. Not every wannabe grunt was a jock in high school, and the PT program in Basic was designed to ease them into shape. This article implies that even that standard was too high.

It seems intuitively exaggerated that the fitness of the nation's 17-year-olds should have declined so markedly in ten years. Am I just blanking out on the problem, old man style?

Now a LOT of the trainees I remember were different even from my early VOLAR BCT battle buddies. Less...well, "hard", I guess, is the word that comes to my mind. When I was under the hat I seem to remember having had a lot more suburban kiddos who had never really been in a serious fight, who were fundamentally, well, "nice" kids and who never really got that this was all about eventually getting them to the point of getting killed. They were like John Candy in Stripes; there for a challenge, or to lose weight, or whatever. The notion of dying - or making the other dumb bastard die - for their/his country didn't seem to occur to them.

But PT injuries? Not so much.

And just between you and me? A HELL of a lot of training units would eventually pencil-whip their PT failures and make them their line units' problem. Yeah, yeah, I know. Not exactly the West Point Code of Honor.

Anyway, not quite sure what to make of this, but thought I throw it out there as a curiousity. Any thoughts?

Am I giving away my age when I observe that all this reinventing the PT wheel stuff makes me wonder when someone will suggest we really, really NEED to try this cool new thing called the "Run, Dodge and Jump"? 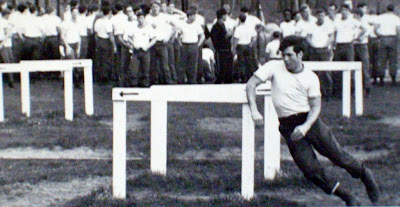