Approaching The Concept of Community 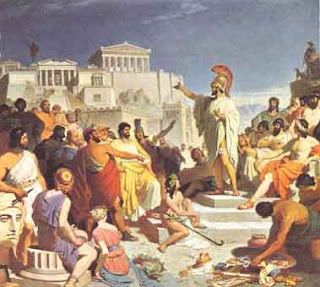 Both Lisa's and jim's recent posts on patriotism and hypocrisy, as well as various comments by the usual suspects have got me thinking about how all this fits together. I have refrained from providing a definition of patriotism since I wanted it to not only include the negative side which receives so much play today, but also the positive side which also receives much lip service, but little else.

First with two interlocking concepts which describe a good portion of the overall concept of "patriotism". Which means it's more than a simple definition that I'm offering, something more in the line of a complex concept/ideal type/"ideal" linked with another complex concept, that of "community", hence the title.

The first concept is the distinction between individual and plurality. This comes up again and again in strategic theory since from a strategic theory perspective, such terms as "conflict", "war", "force", "coercion", "strategy", "tactics", "operations", "victory", "defeat" and a host of others refer to political communities, not to individuals. Too often students and practitioners think in terms of their own individual interests, but that is not what strategic theory is about, rather exactly what it is NOT about. Instead it is about the actions of political communities, either groups within those communities, or between separate communities. An individual who acts alone against the interests of a community is by definition an outcast, an outlaw or a tyrant.

The second concept goes back a long way, to ancient Greece, as does the origin of strategy itself. The Greeks were clear that self-interest was the flip side of justice, that is both were two sides of the same coin and required each other to make any sense. It is only in terms of a community that self-interest can be defined and justice is when the community accepts the claims of the individual as being in line with the interests of the group. This system in turn required a language, a means of communication within the group with terms that had distinct meanings which everyone understood. To this it is also necessary to remember that for the Greeks justice was only possible among equals (Nietzsche spoke a lot of this as well in his Genealogy of Morals btw).

Part of the genius of Thucydides's History of the Peloponnesian War is how well he describes how this very mechanism that I have described comes apart. Athens no longer considers herself one among equals, but above the rest with the power to do as she pleases. The citizenry starts to quarrel among themselves and to see democracy as a hindrance to the demands of Empire. Language itself starts to lose relevance as terms take on new meanings to cover and legitimize base actions. Individuals each seek their own advantage at the expense of the community, and the community itself eventually collapses into chaos and suffers defeat at the hands of Sparta and her allies.

Based on what I see going on in our country, I wonder if the problem is more of a community going through a process of disintegration than of formulating the right policy . . .
Posted by seydlitz89 at 8:41 AM