Hustled by the East

If you've been tooling around the blogosphere today you've probably seen this: It is apparently a gun-camera picture from one of a pair of AH-64s carrying out an attack on Iraqis in 2007.

The purpose of the release of this video is to accuse the U.S. occupation troops of a war crime. And prima facie the video looks damning - the locals are casually walking around, the helos open fire, everybody dies.

The problem for me is that it's not that simple. Guerrillas trade on appearances, and there is nothing in this video that does not say to me that these guys could not have been muj making a recon of a U.S. maneuver element. Because the video identifies two man as journos I want to see what they're holding as cameras with telephoto lensese They do NOT look like RPG-7s to me, but I wasn't there. I can see how the A/C gunner, expecting to see an RPG, could see an RPG. This video is not, to me, damning in its content.

No, to me what's damning to me is the context.

I've been saying all along that the biggest problem I have with all this fiddle-fucking around in Central Asia is not the direct cost, either in blood or in treasure. The costs in both are relatively small, both for us as a Great Power and for the locals, who have experienced more and worse in the past and probably will again, given the state of local governance. My problem with these is;

Fighting foreign locals' wars is bad for both armies and nations if the nation and its army have no intention of conquest abroad.

Western armies flourished in the Third World so long as the Western nations were willing to take what they wanted and weren't too squeamish how many natives they had to kill or imprison or starve to get them.

The Europeans figured out that fighting colonial wars after the home country had given up on colonialism was a mug's game back in the Fifties and Sixties.

It was bad for their armies, which used up much of the goodwill they had built up in WW2 becoming thugs and policemen beating down locals who wanting nothing more than the foreigners out.

It was bad for the countries, which began to routinely lie and spin the colonial wars to try and prevent their home publics from shutting the wars down and forcing the troops to decamp.

There was worse; the combined failures in Indochina and Algeria broke something within the French Army, already damaged by its failure in WW2. The treason of the OAS, and the resultant purges, were an episode that stained the forces that had been the pride of France since the days of the Capets.

There's worse than that; because of the unpopularity of killing people whose only crime is that you are squatting on their home and they want you out - no matter how loathsome those people may be in themselves - the only way a democracy can do this in the long term is to erect a complex edifice of lies that consumes the soldiers, the journalists, the politicians, the bystanders, until you enter an Orwellian world where there is almost no way to establish what is truth, or what is a lie, unless you simply assume that everything said is truth (and wear it like a magnetic bumper sticker claiming that you support "our troops" because they're good, and good people cannot do bad things) or a lie (in which case you begin to wonder what ELSE is a lie, and in the end that road lies in cynicism and disbelief in ANYthing that the government says. Even commonsensical things like regulation of piratical banks and vaccinations...).

And it's actually worse than THAT...because the lands involved are the heartland of Civilization, where the arts of political dealmaking, betrayal, trickery, strategem, ruse and deception have had millenia to ripen and mature.

And into this we've sent the most American of American institutions; our military forces. Duty, Honor, Country...the United States of the bare fist, of the patriotic country song. In pursuit of our chimeric enemies we make our "Special Forces" over into glorified door-kickers, wander around performing "presence patrols"...fall victim to every bazaar rumor, and then find ourselves having to lie our way out of the simple fact that we were outsmarted by the East into a moron-grade butchery that the most childish Waziri or Black Mountain Hazara would have laughed at. 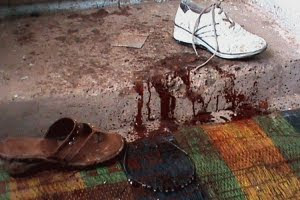 It was one thing to slaughter Germans and Japanese in job lots: global consensus was that they had brought it on themselves.

In Iraq, and now in Afghanistan we are occupying powers in places - it's almost risible to call them "nations" - that we invaded on the slimmest of pretexts (Iraq more so than A-stan) and now occupy on the most tenuous of grounds. As such, like Caesar's wife, we MUST be above reproach.

We cannot toss off dead Iraqis or Afghans as we did the dead of Dresden or Nagasaki. We MUST, if we are to avoid the consequences of being condemned as foolish and casual butchers, consider the locals innocent until proven guilty. That's a wretched way to fight a guerrilla war, but there it is.

I joined an Army that was recovering from another senseless colonial war in Asia, a war that my Army had responded to with lies and deceptions, by inflating body counts that including everything dead and Vietnamese in any grid square as "VC", with corruption and club scandals, with combat refusals and fragging. The reality was that most soldiers and Marines did none of these things, or tried to push back against them when they happened. But the entire Army was tainted by the acts that came to symbolize the war for the insulated civilians in the Land of the Big PX, and it took my service years to recover.

The 2010 Army has learned from its Vietnam candor, and is doing better at hiding checkpoint shootings and wedding strafings. The U.S. public, without skin in the game, doesn't care. The political class, concerned only about their perks and power, has no reason to interfere.

But the bill comes due eventually for trying to hustle the East. I wonder when that bill-collector will knock..?
Posted by FDChief at 4:36 PM