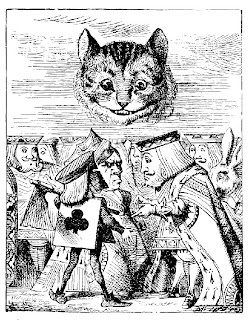 --She wants a head

"Off with his head!" she said, without even looking round
"I'll fetch the executioner myself," said the King eagerly,
and he hurried off
--Alice's Adventures in Wonderland,
Lewis Carroll
_________________
Something is not quite right here.

The Comedy Central cartoon show South Park has caved to a threat from an online Muslim group and removed all references to Mohamed from their program (past and current). For those who don't know South Park, it is a show which reveres no sacred cows -- no religion, race, sex or creed is sacrosanct. Everyone gets a pie in the face. Except, not Mohamed.

There have been rows in the past. Isaac Hayes, a recurring character ("Chef"), left when Scientology was sent up. Writer Matt Stone said, "[We] never heard a peep out of Isaac in any way until we did Scientology. He wants a different standard for religions other than his own, and to me, that is where intolerance and bigotry begin."

"[South Park's muzzling] is a reminder that Islam is just about the only place where we draw any lines at all.

"... Our culture has few taboos that can’t be violated, and our establishment has largely given up on setting standards in the first place.

"Except where Islam is concerned. There, the standards are established under threat of violence, and accepted out of a mix of self-preservation and self-loathing.

"This is what decadence looks like: a frantic coarseness that bravely trashes its own values and traditions, and then knuckles under swiftly to totalitarianism and brute force.

"Happily, today’s would-be totalitarians are probably too marginal to take full advantage. This isn’t Weimar Germany, and Islam’s radical fringe is still a fringe, rather than an existential enemy.

"For that, we should be grateful. Because if a violent fringe is capable of inspiring so much cowardice and self-censorship, it suggests that there’s enough rot in our institutions that a stronger foe might be able to bring them crashing down (Not Even in South Park.)"

So while our soldiers are fighting for Muslim countries to ostensibly gain a measure of freedom, we are self-censoring at the death threats emanating from some members of the Muslim community in our own country. This I don't understand.

Yes, the joke is an old Catskills one, and in other contexts, might be funny. But this was told by a Christian General addressing a somber meeting -- a joke which disparages greedy Jewish merchants, one of the parties which he came to discuss.

For parity's sake, why were there no Hadji jokes? Off with his head, if he tried that one.

What's wrong with this picture?