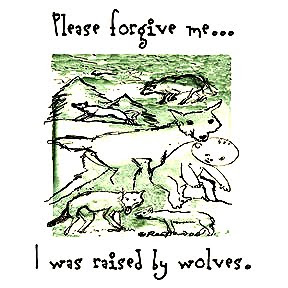 Ranger Bumper Sticker of the Day

The girls smiles. One eyelid flickers.
She whips a pistol from her knickers.
She aims it at the creature's head
And bang bang bang, she shoots him dead
--Little Red Riding Hood and the Wolf,
Roald Dahl
________________
In his column, "Why We Should Worry About Violent Political Rhetoric," L.A. Times columnist Gregory Rodriguez say:

"The recent spike in violent political rhetoric coupled with last week's arrest of two men who threatened the lives of two Democratic House members has a lot of commentators worried about a surge in domestic political terrorism.

If two congressmen were to be killed, how would this be an act of terrorism? IF? How has terrorism become such a bogeyman? Terrorism: The ubiquitous Big Bad Wolf of Modernity. Terrorism is the most overused and misunderstood word in the modern American lexicon.

Every crime against the U.S. is not terrorism. The assassination of John F. Kennedy was not terrorism, though by Mr. Rodriguez's rendering, it would have been. No -- both the JFK killings and that of any congressmen would be political assassinations. Which by the way is exactly what President Obama has recently authorized U.S. operatives to do, by executive order.

Why are the death threats against the congressmen perceived as political terrorism, while Obama's actions are a legitimate exercise of presidential power?

Assassination is a crime, even when authorized by a President.
Posted by rangeragainstwar at 7:59 PM