Tomorrow is the official 60th anniversary of the establishment of the "People's Republic of China", the Marxist/Maoist/socialist-communist/whatever-the-hell-it-is-now edition of the great Middle Kingdom 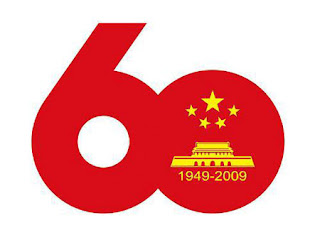 mighty cultural and economic power of Asia (and birthplace of my not-so-mighty little daughter, Maxine Shaomei, whose power is almost entirely composed of thermonuclear adorability - sorry, guys, had to get the plug in there somewhere...)

Having watched some of the last Summer Olympics, I'm sure the anniversary party will be quite a show...

But even in a digital age, there are times when I think that China is still perhaps the original riddle wrapped in a mystery surrounded by an enigma. Massive and complex, at times peculiarly weak, sometimes, and to some, frighteningly strong...it's worth considering the changes that the past 60 years have visited on it and its people.

While just floating around the Internets thinking about this, I came across this story over at China Bystander:

"...just after when Deng Xioaping turned his back on Mao’s revolution and launched the country on its present course of economic development. In the lobby of the Dong Fang Hotel in Guangzhou, just over the road from what we still then called the Canton Trade Fair, an elderly party cadre stood in tears. With his blue Mao suit and cap and weather beaten, careworn nut brown face he was the embodiment of the first 30 tumultuous years of the revolution. The cause of his tears, he said, was the installation of a one-armed bandit, the return of the pernicious evil of gambling, and the betrayal of all he had sacrificed his life for."

The next 60 years will have to be hard put to equal the past 60 for change. But we can be sure of this; change there will be, and throughout the change, China will be a force to be reckoned with across the world. Cliche, yes, I know. But it's hard to avoid that one. The Middle Kingdom is, well, in the midst of everything; its people in both numbers and human genius, it's political and economic power, it's position astride Asia. One can imagine many different futures for our own country, but it's hard to think of one in which China will not be a large part of it... 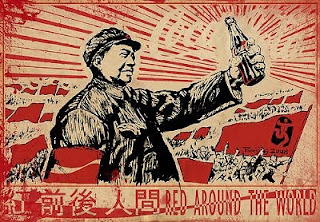 (crossposted from Graphic Firing Table)
Posted by FDChief at 10:27 PM