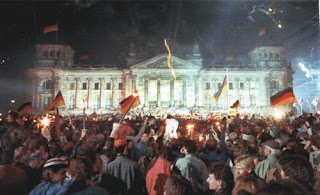 First we did have the end of the Cold War (1947(?) - 1990), and what some of us called the Humint "Gold Rush" which followed, which is kinda best described as finding a Soviet Field Marshall dead in a open field with all his kit . . . documents, papers, fancy lazer range finder, new-fangled artillery sound ranging gear, high-tech binos, all sorts of plans for various odd Sov technologies which have yet to hit open air . . . but I digress.

The Reunification of Germany was an event. And yes, the view was at the time that it had happened perhaps a bit too fast. Now we know of course that both Britain and France were not too keen on the idea of German Unification and worried about a redrawing of Germany's eastern borders. Like the French and Brits saw the German Army as going to march into Breslau and reclaim it as "German" . . . at the expense of Poland.

The reality of course was far from that, the peoples of Eastern Europe were simply happy to be free: to be able to travel and move about as they pleased. It was the greatest triumph of positive human will ever, at least in the West, imo, which of course is why various powers were/are so interested in distorting it . . . The guys (and Mrs Thatcher) at the top didn't have a clue, whereas the those in the "trenches" had a much better view, which is a lesson in itself . . .

Military power had very little to do with what happend in 1989-90. It was about people going out in the streets (as in the regular Monday demonstrations in Leipzig) and taking the power of the state in their own hands. I have a fancy East German Communist Party flag which I found "lying in the street" hanging on my office wall . . . an example of a transfer of power.

While we may argue with how the Reunification was carried out, we should be able to agree that the event itself was a triumph not only for Germany but for Europe and the world.

So, why the sad faces Germany?!

Rather celebrate what was a great victory of the human spirit and something that has left a lasting impression on not only this American . . . This is YOUR DAY, remember it!
Posted by seydlitz89 at 12:31 PM