Objective and Subjective Causes of War 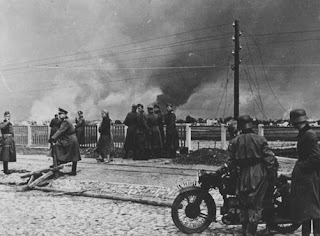 In strategic theory we say that war is influenced by the political conditions which define its nature. While subordination to objective politics and subjective policy is the rational element of war, it also consists (following Clausewitz) of irrational passion and uncertainty. War is thus a very unstable social activity.

The subjective causes of the war in question, World War II, are not debated much (that is besides by Patrick Buchanan), but one doesn't find much on the objective causes, that is the long-term political situation which was set up years before the Nazis took power in 1933.

In general, the pursuit of negative goals, that is, fighting for the complete or partial maintenance of the status quo, requires less expediture of forces of resources than the pursuit of positive goals, namely fighting for conquest and forward movement. It is easier to keep what you have than get something new. The weaker side will naturally go on the defensive.
These principles are obvious in both politics and the art of war, but only on the condition that the sides have a certain amount of stability and defensive capability in the status quo. In the same way that ocean waves grind the rocks on the shore against one another, historical conflict rounds off amorphous political formation, erodes boundries which are too sinuous and gives rise to the stability required for defensive capabilities.
However, sometimes this condition is absent. The Treaty of Versailles has filled the map of Europe with historical oddities. The class struggle has created a layer cake of different interests and factions on this map. In these conditions the pursuit of the negative goal of maintaining the status quo may be the weakest rather than the strongest form of waging war: sometimes a superiority of forces will be required for a defense rather that for an offensive, depriving the defensive of any meaning. . .

For centuries since the time of Cardinal Richelieu, French diplomatic thinking has been nurtured on the idea of creating conditions of fragmentation, open fields, and weaknesses in Europe. As a result of the work of French policy, whose ideas are expressed in the Versailles "Peace" Treaty, all of Central Europe - Germany, Poland, Czechoslovakia and so forth has been placed ina situation which completely rules out the possibility of defense and positional warfare. The French vassals have been skillfully placed in the position of a squirrel compelled to turn the threadmill of militarism. The art of French policy lies in the skillful creation of unstable situations. This is the reason for the impermanence of this creation. The idea behind the Versailles Treaty, putting Germany in an indefensible position, has made it physically necessary for Germany to prepare for offensive operations. Poland will stiall have the opportunity to ponder how it should thank France for the gift of the Polish Corridor, which has put Poland first in line for a German attack.

I would only point out that originally the German High Command after the First World War toyed with the idea of using guerrilla warfare to lure in the attacking allies and defeat them inside Germany. This was quickly rejected as impractical and unsuited to the German character and General von Seeckt proceeded to build a highly mobile and professional offensive force which would be able to attack Germany's enemies one by one and defeat them before they had mobilized their mass armies. All this within the restrictions of the Versailles Treaty which having been signed by Germany was the law of the land. So the political situation required offensive war against a surrounding hostile alliance, but forbad Germany the military to carry it out.

This offensive policy was supported by every Weimar government till the collapse of the Weimar system in 1932.

With France the center of gravity for the allied effort, Germany would be required to neutralize each of France's allies which bordered Germany - Czechslovakia, Poland and Belgium - before attacking France. After that a armistice could be decided upon with Britain. This was in fact the line of approach that Hitler took, which was part of his own plan for a war of conquest, but also followed the objective political conditions established in 1919.

So why did France decide on such a policy at the end of the First World War? It required the maintenance of a strong system of alliances with the new Central European states promising France a high level of influence and it tied the hands of the military to a policy which limited their options. The crisis came with the change in political leadership during the late 1920s and the construction of the Maginot Line starting in 1930. France did not have the resources to maintain the Versailles offensive strategy, and attempted to switch to a defensive strategy with heavy defenses, but the unstable political reality which the original policy had established remained. For this original strategy to have worked, the French would have had to have declared war on Germany in 1936 for entering the de-militarized Rheinland. Even when Germany attacked Poland, there was a great opportunity for France to attack in the west and clear the western bank of the Rhine which would have been a massive shock to the German people, whose support for Hitler's war in 1939 was lukewarm at best. . .
Posted by seydlitz89 at 1:23 AM