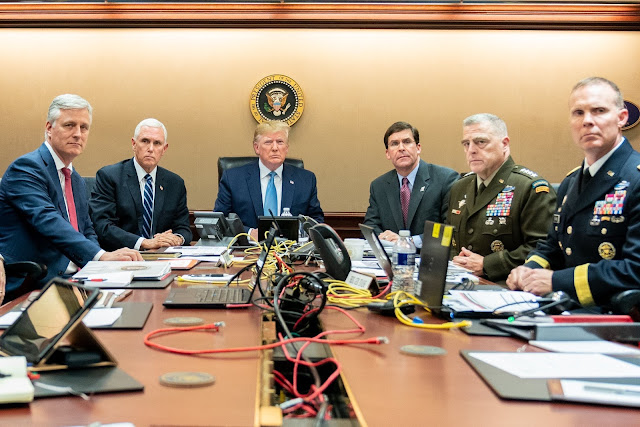 Interesting photo of the WH situation room.  Supposedly the pic is of Commander-in-Chief Bone-Spurs and his team watching the takedown of al-Baghdadi during real time via some type of classified VTC or other video system.  I have a few comments:

3]  All except Robert O'Brien, Trumpy's latest National Security Adviser, who has the gift of looking both solemn and whimsical simultaneously. O'Brien is the guy who recently said he would never stifle Trump’s military ‘genius’.

4]  General Milley does look a bit disgusted at being in this dog and pony show.  And check out the huge saddlebags under his eyes.  Poor bastard hasn't had a good night's sleep since he took over as CJCS.

5]  If they are watching the action the photographer is in the way blocking their view.

6]  Trump's IT team needs a smack in the the head.  Did these guys use to work building bird's nests?  My 18-year-old grandson does a better job of dressing up cable clutter, and he has two desktops, four laptops, a big screen TV, several modems, and a dial-up telephone all interconnected in his basement.
Posted by mike at 1:16 PM