Springtime for Erdogan, winter for the YPG

I'd love to blame this one on Donald the Dove, but, sadly, I think the upcoming betrayal of the Kurds who fought for U.S. objectives in Syria is likely to have happened under any U.S. government. There's just no compelling national interest there, and the notion that they would have gained any sort of lingering obligation from Uncle Sammy by killing and dying for him was...well, the YPG could have asked any Vietnamese highland clansman or Iraqi translator what happens when you put your faith in the Big Guy to stand by you when you're no longer of any sort of geopolitical value.

The sadly-ironic part is that we're again reminded that for all his tough-guy talk Donnie is a puff-pastry when real dictators come into view, and his "foreign policy" is entirely based on what's in it for him.

In this case at least his cupidity and political cowardice will insure that the dead are "only" dusky foreigners and not Americans. Given the wasteful spending of lives my country has indulged in since 2001 perhaps that's the best we could have hoped for.

For the Kurds, well...this must feel pretty familiar. 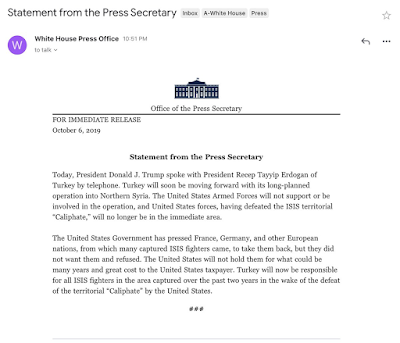 ...is a nastily cynical bit of business. "Captured ISIS fighters"? My ass.

Look, if you want to throw your Kurdish proxies under the bus, fine. Man up and admit it. Come out and say "We no longer have compelling interests in northern Syria and will not stand in the way of Turkey's desire to crush armed Kurdish forces, wherever they may be." Or, if you have to, try and make up at least a more plausible lie. "Captured ISIS fighters" is ridiculous nonsense; Trumpkins who don't care about dusky Mooslims can't be bothered, and anyone who knows anything about this sees it as the cheap and transparent lie it is.

Or, better yet, don't say anything. Dirty deeds are always done more appropriately in the night and the fog.

Update 10/8: Perhaps Sven is the only perceptive one here in sussing out that the supposed-Commander-in-Chief doesn't really command jack shit and his words are, indeed, meaningless:

My guess, though, is that Trump did, indeed, direct the abandonment of NE Syria and that the military and whatever-is-left-of-the-diplomatic-corps is trying to slow-roll the troop movement to let adults try and talk Liddle' Donnie out of whatever caused his tantrum after getting off the phone playdate with his buddy Erdie. There is no real reason to do this other than whatever bat is in Trump's belfry; if a handful of GIs can keep Turkey and the YPG from going at each other that really is better than the alternative, regardless of how you feel about idiotic U.S. adventures in the Middle East in general.

This, on the other hand, is just TOO perfect:

Update 10/12: The "Celebrity Geopolitical Apprentice" showrunners are clearly now past just doing weed and blow and are huffing sterno straight from the can, because it would take a perfect fool to set up this ridiculous plotline; the orange-tinted frontman, having bloviated that he will #endendlesswars proceeds to feed more GIs into the meatgrinder. And, in the unintentionally comic kudo of the season, claims that the move will inaugurate a new - or, rather, a return to a very old and discredited - military tradition; renting the nation's armed forces to a client state in return for cash: 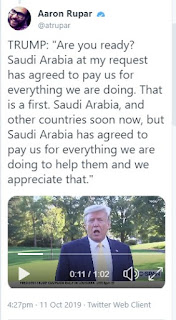 First, if I was one of those zoomies I'd be pretty chapped. First, because I'd be me, and as me I would happily tell Prince Bonesaw and his merry band of religious nuts to fuck off and die in a hole. Outside of Israel, Saudi is the most worthless "ally" the US has in the Middle East. The people who Trump says should die now because they didn't help us on D-Day are a thousand times more valuable to US interests than the most pimped-out Saudi royal.

Second, IIRC Bush the Elder got most of the costs of the '91 Second Gulf War repayed by the various oil sheikdoms, so this isn't like Trump is coming up with some brilliant stroke of foreign policy here. Like he always does, he's just slapping his brand on other people's work.

And, third, the Bush example is a good counterpoint to how you do this if you really know how to play the foreign policy game. You ostentatiously lend support to your clients, emphasizing what a great partner you are, how strong and magnanimous you are and will be...and then, quietly, you stick out a hand so your grateful pals can slap you on the palm with some Franklins. You don't blow your intention to get moo-la-la in return for your mercenaries out your piehole first before you get so much as a single rial so you don't look like a fucking chump if and when the client stiffs you.

Mexico was gonna pay for that wall, amirite? Bwa-ha-ha...

I'm as tired of these idiotic whack-a-muj exercises as anyone. There's no real point to them anymore, largely because there has never been a genuine attempt to assess what the U.S.'s interests are in these parts. It's all fear and panic and "radical Islamic terrorism" all the way down.

Trump just adds a particularly idiotic icing to this shitcake.

As he is with U.S. domestic politics; he's not the disease. He's a symptom.

But...damn if it's not a pretty nasty virus.

"Rarely has a presidential decision resulted so immediately in what his own party leaders have described as disastrous consequences for American allies and interests. How this decision happened — springing from an “off-script moment” with President Recep Tayyip Erdogan of Turkey, in the words of a senior American diplomat — likely will be debated for years by historians, Middle East experts and conspiracy theorists.

But this much already is clear: Mr. Trump ignored months of warnings from his advisers about what calamities likely would ensue if he followed his instincts to pull back from Syria and abandon America’s longtime allies, the Kurds. He had no Plan B, other than to leave. The only surprise is how swiftly it all collapsed around the president and his depleted, inexperienced foreign policy team."

What the...what the actual fuck..?

One thing I think is important is not to overestimate the rock-bottom level of Orange Foolius' actual understanding. I don't know much about the topography and geography of Syria, but right off the top of my head I don't think there really IS a "lot of sand over there". The deserty parts of eastern Syria are mostly rocky desert (the Hamad) or bare soil (the Homs desert).

But here's the thing; when this simple fucker hears "Arab" he probably really does think "Ahab, the A-rab, Sheik of the Burnin' Sands".

It's like having a really simple ten-year-old as a president.

Update 10/18: So apparently the Trump Administration and Erdogan's Turkey arrived at some sort of agreement to pause Operation Peace Spring for about five days. As the linked piece notes, it's pretty much a Munich Agreement between the US and Turkey to allow Erdogan to get his piece of Syrian Sudetenland:

"This is essentially the US validating what Turkey did and allowing them to annex a portion of Syria and displace the Kurdish population," a senior US official familiar with operations in Syria told CNN. "This is what Turkey wanted and what POTUS green lighted. I do think one reason Turkey agreed to it is because of the Kurds have put up more of resistance and they could not advance south any further as a result."

My question is "What does this operational pause (since it's NOT a ceasefire and fighting is going to continue) "mean for the U.S. on the ground in Syria?"

I mean, the only way this actually helps is if there's a massive Dunkirk of Kurds from NE Syria; lock, stock, pots, pans, cats, kids...everyone gets marshaled out of their farms, towns, and cities, trucked to the railhead or airhead, and then from there to secure locations...where? somewhere south in Syria? To refugee camps at the tender mercies of Assad's Mukhabarat? To Iraq or Jordan?

And how does the US actually facilitate this? The logistics alone are breathtaking, and would require a massive commitment from a superpower - how the hell are the Syrian Kurds themselves going to do this alone? Surrounded by enemies (or at least people who are indifferent to their survival) and without a welcoming place to go to? I'm sure they might get a grudging reception from Iraqi Kurdistan, but those provinces are not rich, and have little in the way of resources (or need) for million of displaced relatives; it's be like having my in-laws come to live in our basement.

I mean...after Trump greenlighted this atrocity it's good that his people have managed to somehow deflect some of it. But I don't see how this works as anything but a rolling goatscrew without massive, immediate, and well-organized US-supported and internationally-coordinated evacuation.

To kick back and congratulate yourself over this is pure Trumpian looney-tunes.
Posted by FDChief at 5:36 AM