The Mother of All Parades!

People's Republic of China celebrated the 70th anniversary of its founding with both a gigantic military parade and a people’s parade.  Despite the rioting and the shooting(s?) in Hong Kong.  Was Donny's dream about the parade?  Or about the violent crackdown on protestors wishing he could do the same to Nancy and the WH press?

The South China Morning Post claims 15,000 troops paraded, with overflights by 160 aircraft, and there were 580 pieces of weaponry and equipment.  Advanced weaponry shown including the new hypersonic DF-17 glide vehicle and the longer range DF-100 (is it a missile, a drone or a nuke tipped reentry vehicle?).  I personally like the tiny two-man, open-cockpit helicopter, or is it an autogyro?  It’d be great for a commute to beat Seattle traffic and could land in my daughter’s tiny back lot.  Two links below, the short version at just over three minutes, and the full version at almost three hours.

And oh I forgot, for FDChief they had two battalions of women-at-arms parading in boots and miniskirts.  The ladies are at 1:00:45 and again at 1:03:15.  Here is a preview teaser: 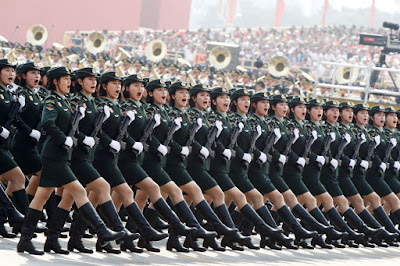 And a precedent, they allowed foreign troop contingents to march at National Day for the first time ever.  Mostly the usual suspects, but also Mexico, Afghanistan, and the Republic of Fiji.  No GIs of course, but  China Central TV was kind enough to call out the contribution of Chennault's Flying Tigers.

The civilian portion of the parade had several million pompoms and flower bouquets,  angel-voiced pre-teens, high school glee clubs, 21 open-top sightseeing buses full of Civil War and Sino-Japanese War veterans too old to march, parade floats that put the Rose Parade to shame, cheek tats, ethnic minorities in traditional dress (including the much maligned Uighurs).  Lots of stone-faced suits in the reviewing stand with iron bladders.  This civilian version can be seen startin at 1:40:00 of the three-hour video above. 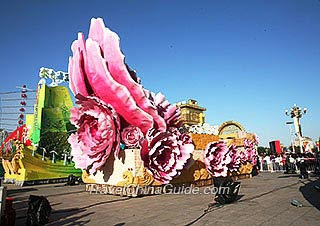 Festivities are continuing through the 7th.