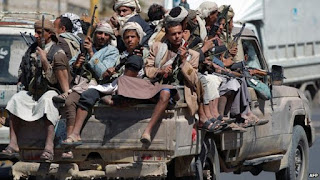 September 26th marks four and a half years of the Saudi and Emirati war in Yemen.  With US support!  Below is a link to a piece from April 2015, a month after that intervention started.  Titled US generals: Saudi intervention in Yemen ‘a bad idea’.  Some flag officers at CENTCOM and at Special Ops argued strenuously against supporting the Saudi-led intervention because the "Houthi movement has been an effective counter to Al-Qaeda."  Those Special Ops guys were also clairvoyant in noting that Saudi/UAE intervention was doomed – even as the Saudis were saying it would take a few weeks.  Supposedly some in SOCOM still “favor the Houthis, as they have been successful in rolling back AQ and IS.”

The Saudis labeled it 'Operation Decisive Strike', a criminal misnomer IMO.  There are 91,000+ dead Yemenis many of them civilians, hundreds of thousands devastated by cholera and malnutrition, three million displaced, 54 months of indiscriminate bombing of marketplaces & funerals & weddings et al, and billions of dollars down the toilet.  Just glad it is Saudi and Emirati dollars, except for the million or two US $$ for refueling flights.  But it looks like the T-Rump is going to increase that by an order of magnitude with this new force package he is sending to protect the House of Saud and their pinheaded prince.

1] Saudi Arabia and the UAE and their minions against the Houthis and their tribal allies. The minions later included some help from Egypt, Sudan, Morocco, Jordan, Kuwait, Qatar, and Bahrain.  This is the main fight, and was meant to restore the propped up president, Abdrabbuh Manṣūr Hādī (who like an absentee landlord lives in luxury in Riyadh, Saudi Arabia)  -  and thrash the Houthis who they consider heretical and convert them to a creed more in line with Wahhabi thinking.

2] Add in Iran support to the Houthis.  Although I don’t believe they were ever outright proxies of Tehran.  Reportedly Iran advised the Houthis NOT to take over the Yemen capitol of Sana’a back four and a half years ago.   But they did anyway.  And after the bombing campaign started Iran gave what support they could.  Undoubtedly there is funding and IRGC connivance in weapons supply.  And probably targeting intel within KSA via the Saudi Shia resistance, which is infiltrated by Iran.  But bin-Salman and bin-Zayed and our neocons seem to believe the entire Houthi movement started at the behest of the Ayatollahs.  I object, but those guys get paid much more than I. .

3] Another conflict is the battle for influence and control between the Saudis and Emiratis.  Both back factions opposed to one another.  Current shoot-em-ups are between the Saudi-supported Yemeni government in exile (Hadi) and southern separatists backed by the UAE (the STC or Southern Transitional Council).  The STC wants a two state Yemen like it was during the period from the early 1960s up until unification in 1990.

4] The fourth war pits al-Qaeda in the Arabian Peninsula (AQAP) and/or Ansar al-Sharia against everybody else.  With a few US drone strikes against known or supposed hi-value AQ targets.

5] This one is kinda like the fourth, but it is the Islamic State of Iraq and the Levant – Yemen Province (ISIL-YP) instead of AQ.


Numbers 3, 4, and 5 have been mostly underreported, if reported at all in the western media.