Officially it was 2 September 1945 in a formal setting on board the USS Missouri in Tokyo Bay with the famous photo of Dugout Doug MacArthur lording it over the ceremony.   It was about three weeks earlier on 10 August that the Swiss Embassy in Washington notified US Secretary of State James F Byrnes of Japan's intention to accept unconditional surrender.  There was just one small proviso, that Emperor Hirohito be permitted to remain in place.  Truman accepted.  Actual surrender was acceptance of the Potsdam Declaration just past noon of 15 August in Japan.  Because of time zone differences it was about 11 PM on 14 August in Washington DC. 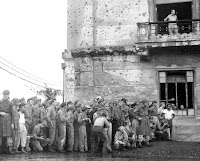 The photo on the right was taken 19 August with MacArthur on the balcony of Manila City Hall.  Mac and the GIs and Filipinos below him are waiting for the Japanese delegation coming to accept the orders to surrender and return them to Tokyo.  City Hall, one of few buildings left standing, was still pockmarked by bullets from the Battle of Manila six months earlier which had resulted in the death of 1000 American GIs, 16,500+ Japanese, and 100,000 Filipinos.


That Japanese delegation to Manila had flown from Tokyo to Sata Misaki on the southern tip of Kyushu and from there to Ie Shima , an island just off the western edge of Okinawa.

They flew in two twin-engined Mitsubishi G4M1 aircraft, AKA Bettys.  They had been stripped of all weapons and were painted white with green cross markings instead of the red meatball.   Partway to Ie Shima they were escorted by B-25 Mitchells and P-38 Lightnings, just in case some bushido fanatic tried to stop the peace talks (That was not paranoia on the part of the Americans on Ie Shima.  On 15/16 August on hearing of the surrender Japanese guards murdered over 100 American POWs.  Many Australian and British prisoners of war were murdered at Ranau and Sandakan in Borneo.  Plus at Batu Lintang in Borneo, death orders were proposed to murder some 2,000 POWs and civilian internees but the camp was liberated before they could be carried out.).   From Ie Shima they were put on a Douglas C54 Skymaster to proceed to Manila and meet Mac to accept the surrender orders. 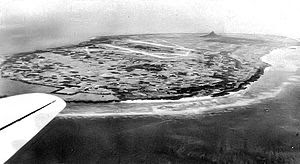 Ie Shima or Ie Island, known as Iejima to the Japanese, is a very tiny island of about 23 square kilometers or less than nine square miles.  At that time it had one of the largest airfields in the Pacific.  Which is why it was selected for the changeover.  It is where Pulitzer Prize winning war correspondent Ernie Pyle, was killed by machine gun fire when he was covering the 77th Division liberation of the island and airfield. Every April there is a memorial service there for him.

It's a beautiful place today. Covered in gardens of vegetables and flowers.  Every April, in addition to the Ernie Pyle memorial, the island hosts the Iejima Island Lily Festival featuring acreage that looks like gigantic carpets of snow white lilys.


At MacArthur's dog and pony show on the 2nd (i.e. the formal surrender ceremony), the Japanese delegation was led by Mamoru Shigemitsu, Minister of Foreign Affairs and General Yoshijirō Umezu Chief of the IJA General Staff.  Mac's staff had specified all the details of the ceremony.  So was it a slap in the face to Admiral Nimitz that Admiral Soemu Toyoda, Chief of the IJN General Staff was not among them?  Some thought so at the time.  Both Shigemitsu and Umezu were later convicted at the Tokyo War Crimes Tribunal.  Umezu certainly deserved it for his time in China as CG of the Japanese 1st Army and later CinC of the Kwantung Army.  Umezu died in prison four years after the surrender.  Shigemitsu, known as Shiggy to the American press, got a raw deal and never should have been convicted.  He had opposed militarism his entire career in the diplomatic corps, had opposed the war, and he had "argued that the success of the proposed Greater East Asia Co-Prosperity Sphere depended on the equal treatment of China and other Asian nations with Japan."  It was Stalin that wanted him on trial.  He had been ambassador in Moscow in 1938, so he must have stepped on some toes there during the Japanese/Soviet border conflicts.  Despite depositions from both American and British diplomats about Shigemitsu's opposition to the war, MacArthur caved to the Soviets.  Or maybe it was Truman?   But Shiggy was released from prison in 1950 he eventually went into politics becoming a member of the Diet in 1952 and Deputy Prime Minister in 1954.